Best Things to do in Gujarat for Unforgettable Memories

The frontiers of West India, especially Gujarat has earned its position among the best holiday destinations in India. Owing to all the possible things to do in Gujarat, it will be your favorite place to holiday too. There are a number of unforgettable experiences awaiting you while you explore its rich history, culture, architecture, and more. Maybe cycling around the coastline is a good idea.  Or picking up binoculars to spot wildlife. Or, peek in the heritage, tasting the authentic flavors or just exploring the top places to visit in Gujarat.

This Gujarat travel guide covers a list of the best things to do in the state that you cannot miss out on.

, Gir is wild haven. Hop on a jeep and ride through the deciduous forest of Gir national park[1] to get a glimpse of the Lions. In fact, it is the only home in Indian for the fearless Asiatic Lions. Chowsingha (four-horned antelope), hyenas, jackal, Indian Fox are the other animals who share the shelter.

As for the avifauna, the no. goes up to 200 species, along with 40 species of amphibians and reptiles. What’s even interesting to know is that it’s the only national park which has a community living in its perimeter. Surely, it is one of the top things to do in Gujarat.

2. Bow your heads at Somnath Temple

Now it’s time to shift our focus to the religious side by taking a sightseeing tour to the Somnath Temple[2]. Legend has it that the shrine was built in silver by God Ravi, in gold by the moon god Soma, in wood by Lord Krishna. While in the 11th century, the temple was created in stone by the Solanki Rajputs. However, what we see today is the 17th version built on the original site in 1951.

Among the most religious sites in India, it is believed to be the 1st Jyotirlinga shrines of Shiva out of the 12. Another reason pilgrims’ visit this tourist attraction in Gujarat is for the conflux of Saraswati, Kapila, and Hiranya. Furthermore, legends say that the Moon God worshipped the Shivling here and that’s where the temple got its name, Somnath.

3. Fall in love at Rann of Kutch

Rann of Kutch is a rare beauty, and even travelers from across the world agree to this. This famous tourist attraction of Gujarat is a typical mix of sand and salt, spread over 7500 sq. km. In fact, the rare beauty is listed among the largest salt deserts in the world. It lies between the Arabian Sea and the Thar Desert. Moreover, it offers a vision not to miss during the night.

P.S- Prior permission for taking a car or bike to the Rann of Kutch is required.

4. Marvel at the might of the Statue of Unity

This gem of Statue of Unity[4] was recently added to the crown of the state. In no time, it joined the list of top places to see in Gujarat. Statue of Unity is a homage to the visionary leader Sardar Vallabhbhai Patel and is the world’s largest statue. It stands tall at the height of 182 m and is sculpted close to the Sardar Sarovar Dam on Narmada River.

Statue of Unity salutes the undying efforts of Sardar Vallabbhai Patel who was the first deputy prime minister of India and also someone who worked with Mahatma Gandhi for Indian Independence. He is also credited for bringing together the 562 princely states of India and tying them all together as Union of India.

5. Relax by the Kankaria Lake

Finding its place among the top tourist destinations in Gujarat, Kankaria Lake[5] lets you rejoice in the simple pleasures. In Ahmedabad, it’s an oasis of bliss to relax after a rather chaotic day. Yes, that’s exactly where this lake which exhibits 34 sides like a polygon is settled. The lake was built under the rule of Sultan Qutb-ud-Din Ahmad Shah II in 1451 and has been a major attraction since then. Visit here in the evening and be a part of the crowd who come here to enjoy attractions like kids city, toy train, zoo, water rides, food stalls, balloon ride and more.

Besides, you can plan a visit here in December and be a part of the Kankaria Carnival which takes place over a week. Cultural performances and other activities are a major highlight of the carnival. 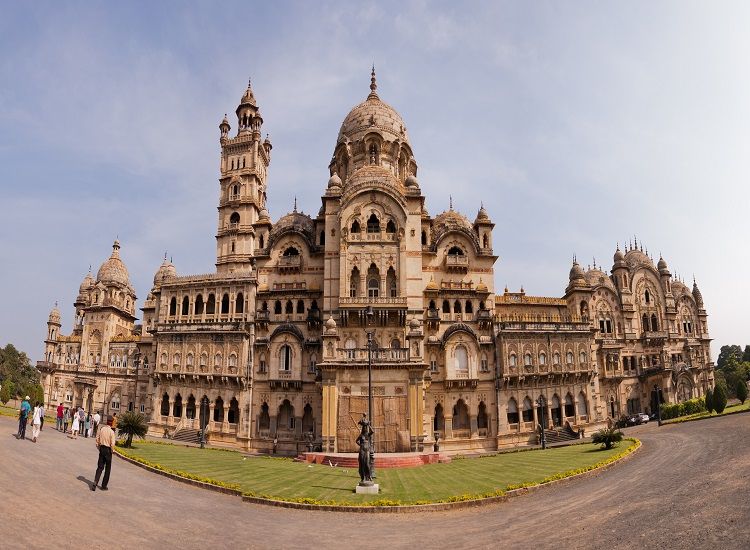 A star in the sky of Vadodara is this next tourist place of Gujarat, Laxmi Vilas Palace[6]. It was the brainchild of Maharaja Sayajirao Gaekwad III for his family. Till date, it is among the world’s largest private dwelling unit. What’s more interesting is the size of this palace. Spread over 700 acres, it’s thrice the size of Buckingham Palace, amazing right?

Wait, I’m not done yet! The palace has several buildings, Moti Baug Palace and Maharaja Fateh Singh Museum are the most talked about. Apart from this, the palace also has a golf course which was built in the 1930s was made public in 1990s.

7. Pray to the Lord Krishna at Dwarkadhish Temple Gujarat opens doors to the pristine Dwarkadhish Temple[7] located at Dwarka for the dear worshippers of Lord Krishna. Dwarkadhish Temple, also known as Jagat Temple is believed to be built by the grandson of Lord Krishna, Vajranbha. This Hindu temple is swarmed by pilgrims all-round the year for it is a part of the Char Dham Yatra. Therefore, a visit to the holy temple is among the top things to do in Gujarat.

According to legend, Lord Krishna built Dwarka on a piece of land which was found in the sea. Later when Durvasa, a Hindu saint came to meet Krishna and Rukmini and wished to visit their palace. As they walked towards the palace, Rukmini felt tired and asked Lord Krishna for some water. Lord Krishna harrowed a hole from where the Ganga River started flowing. Upon watching all this, the saint in his rage cursed Rukmini to stay at the same place. The Rukmini temple we see today is exactly where the queen stood.

How can we forget the very famous Sabarmati Ashram[8], also known as Gandhi Ashram?  This is the place where Mahatma Gandhi stayed for 12 years. In fact, this wasn’t the first ashram in India where Gandhi stayed, rather it was Jivanlal Desai’s Kocharab Bungalow. By the time it was 1917, Gandhi realized that he needs a bigger place to continue various activities like animal husbandry and farming. And that’s when he came to Ashram close to the River Sabarmati and was named after the same. It was from here, he started the famous Dandi March (Salt Satyagraha) on 12 March 1930.

At present, the ashram houses a museum by the name Gandhi Smarak Sangrahalaya. Other attractions inside this ashram are Vinoba Kutir a cottage owning its name from Acharya Vinoba Bhave; Nandini which is a guest house; Magan Niwas and Upasana Mandir.

One of the best things to do in Girnar, the spiritually blessed hills of Gujarat is to hike and conquer them. The hill which is the highest point in Gujarat is best known among pilgrims for the 866 Jain and Hindu temples and among trekkers for its trekking trail. Now that you have started thinking about pushing your limits in Gujarat, what more is to be known is that it takes around 9999 steps to reach the top, really!

The best time to visit Girnar for a thrilling time is between September and March. Early morning is a good time to start trekking exploring the temples. Built in the 11th century by Queen Udayamati of Solanki Dynasty in the memory of his husband, Rani Ki vav[9] is one of the best places to visit in Gujarat. The charming INESCO World Heritage Site in India deserves every praise. This intricately carved stepwell was given the honor rather it was done in 2014, years after its excavation.

Also known as the Queen’s Stepwell, this tourism attraction in Gujarat sits close to the River Saraswati and is sculpted as an inverted temple below the surface of the earth. Moreover, the site is a marvel divided into 7 levels, 4th level possessing the tank. Rest of the site has 500 major sculptures and 1000 minor which exhibit a mix of secular and mythological imagery.

Tanisha Sharma, is that odd head in the crowd of travel writers who calls architecture to be her muse. When not traveling, she could be found day dreaming about all the architecture or food in the world. It won’t be wrong to say that writing, music, novels and dogs have taken over and become an essential part of her life.