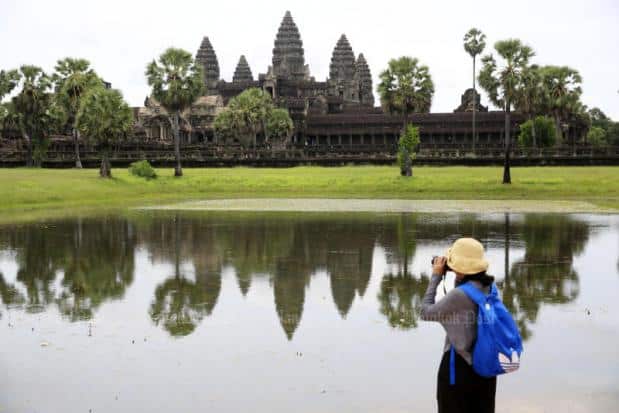 Angkor Wat in Siem Reap is one of the top destinations for visitors from Vietnam. (Post Today photo)

Tourism Minister Thong Khon has called on Vietnam Airlines to increase their flight frequency to Cambodia, particularly to Phnom Penh, Siem Reap and the coastal areas, in response to a big jump in demand.

, , attributing it to peace and political stability in the kingdom, the government’s open sky policy, as well as the opening of international border checkpoints with neighboring countries.

“We urge Vietnam Airlines to expand its flights from Vietnam to Phnom Penh, Siem Reap and the coastal areas,” the Khmer Times[1] on Friday quoted him as saying.

“We also call on tour operators, and relevant stakeholder to continue supporting and boosting the promotion of the Cambodian tourism sector both to the domestic and international markets through the creation of new tourism products, tour packages, including those linked to events, and ceremonies to attract tourists,” Khon said.

Khon said that to support the dynamic growth of tourism, the development of air, land, water and rail transportation and other infrastructure is necessary.

, putting the current number of tourists from Vietnam at 900,000.

He said 15% of Vietnamese tourists use air transport while the rest uses water, air and land transport systems.

A report from the Ministry of Tourism shows that 619,195 Vietnamese tourists visited the country from January to October, a fall of 4.7% compared to the same period in 2017.

A large number of Vietnamese tourists visit the country for holiday purposes, while 38,217 came for business purposes.

Sin Chansereyvutha, the spokesman for the State Secretary of Civil Aviation, . He said Vietnam Airlines operates about 47 flights every week.

, they are allowed to add more flights. This is the flexibility they have and they just have to send us a letter and we will approve the flights,” Vutha said.

Best Things to do in Gujarat for Unforgettable Memories