From Unicorn Cafes to Underground Bars: Where to Stay, Eat and Play in Silom

Confused on where we are? I’m taking this moment while my travels are grounded to care for my mom to catch up on my black hole of un-blogged content. Here, I’m covering my time in Thailand[1] in May of 2017. My apologies for any confusion with the timeline, and thanks for sticking with me.

It was that time of the year that always arrived with a mix of excitement, sadness, . Typically, I use the trip up to Bangkok to catch my international flight as an excuse to, what else, plan a little adventure in my home-away-from-home country.

If you every check out my destinations page[2] and see the list of cities, island, national parks and more than I’ve been lucky enough to explore in Thailand, you’ll see it’s a country I’ve loved getting to dive into. 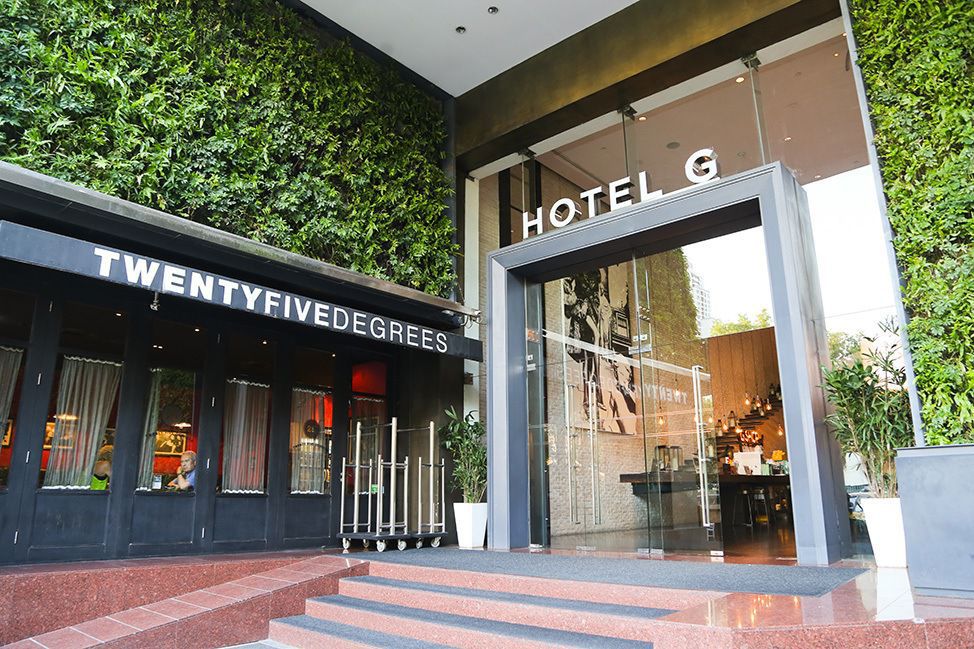 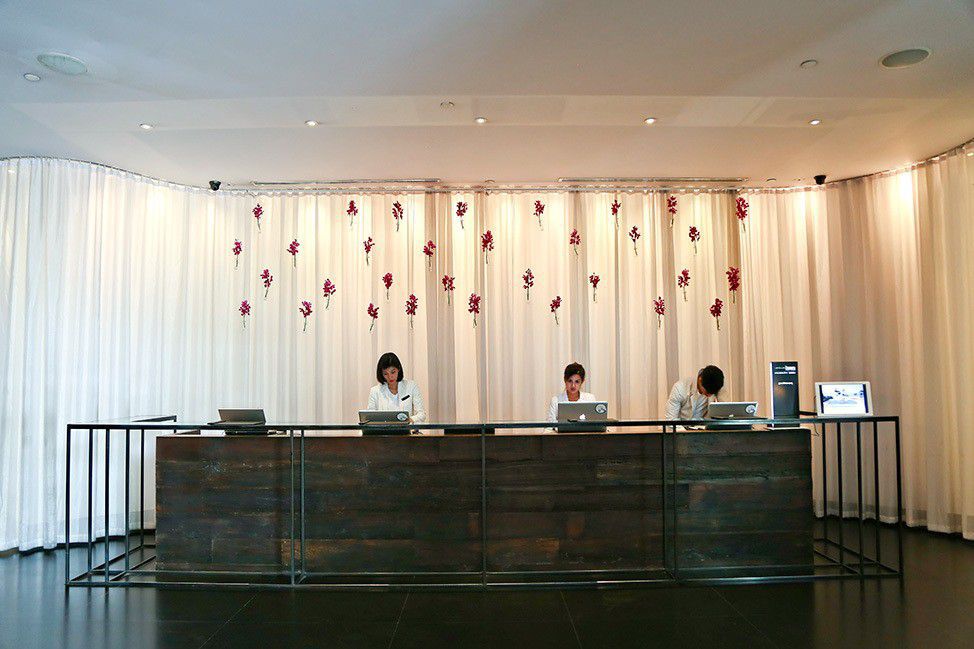 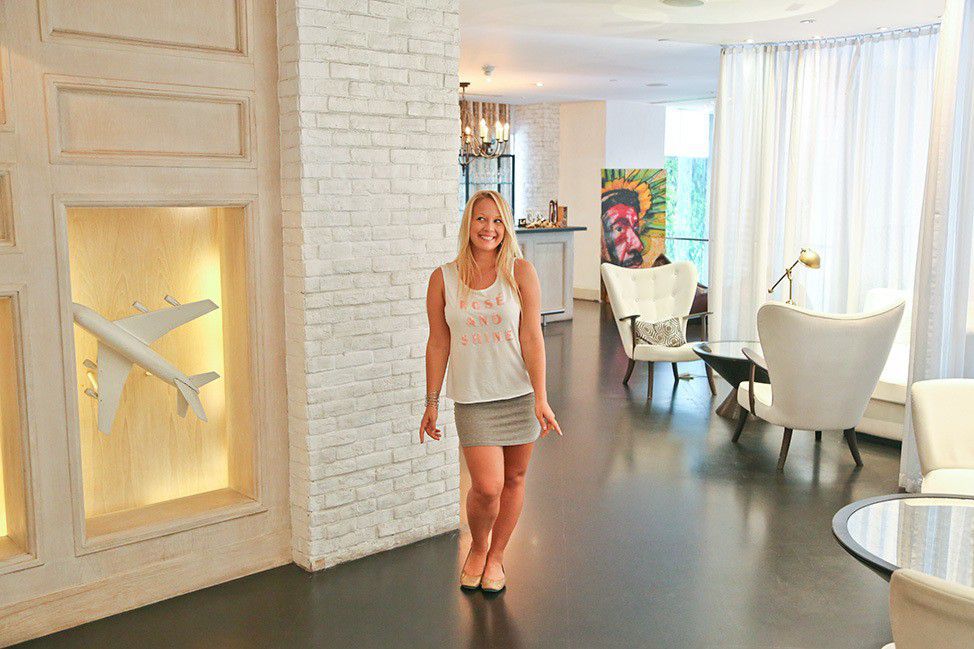 For this little week-long farewell trip, Ian and I were going to dive into two Bangkok neighborhoods in depth, take an overnight cruise up the Mekong River, and spend two nights enjoying Ayutthaya in style.

We kicked things off in the Silom and Sathorn neighborhoods of Bangkok, which we’d both breezed by in the past, but never stayed in or really explored in depth. All that was about to change, courtesy of a two night stay at Pullman Bangkok Hotel G[3]. 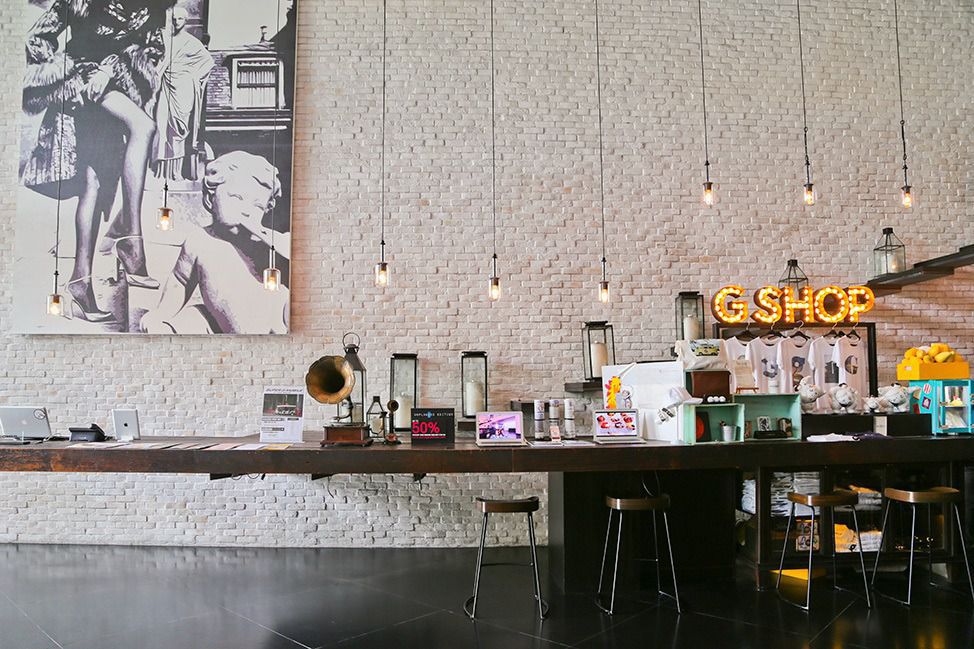 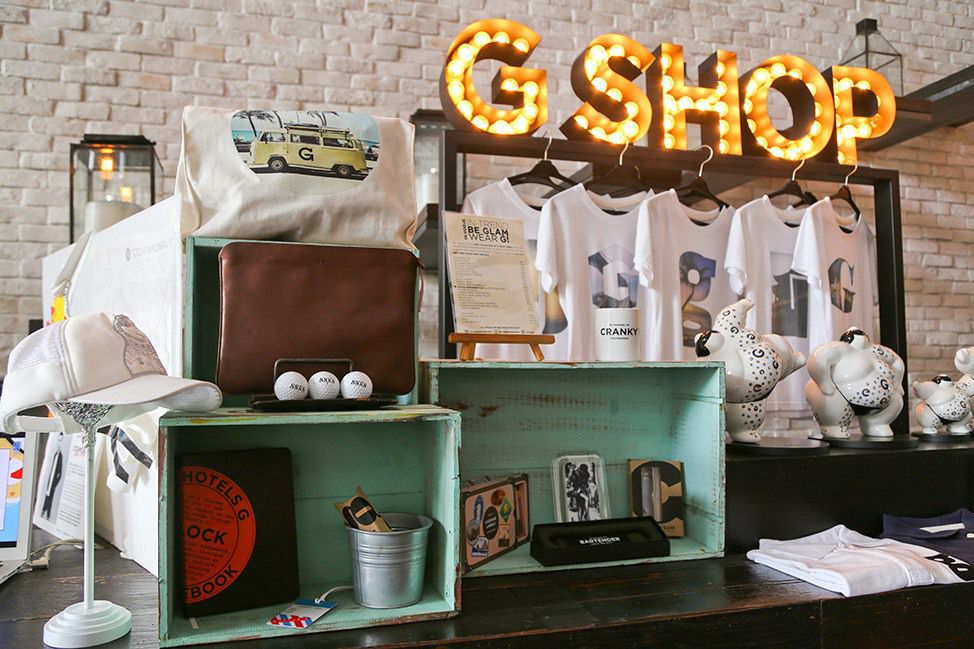 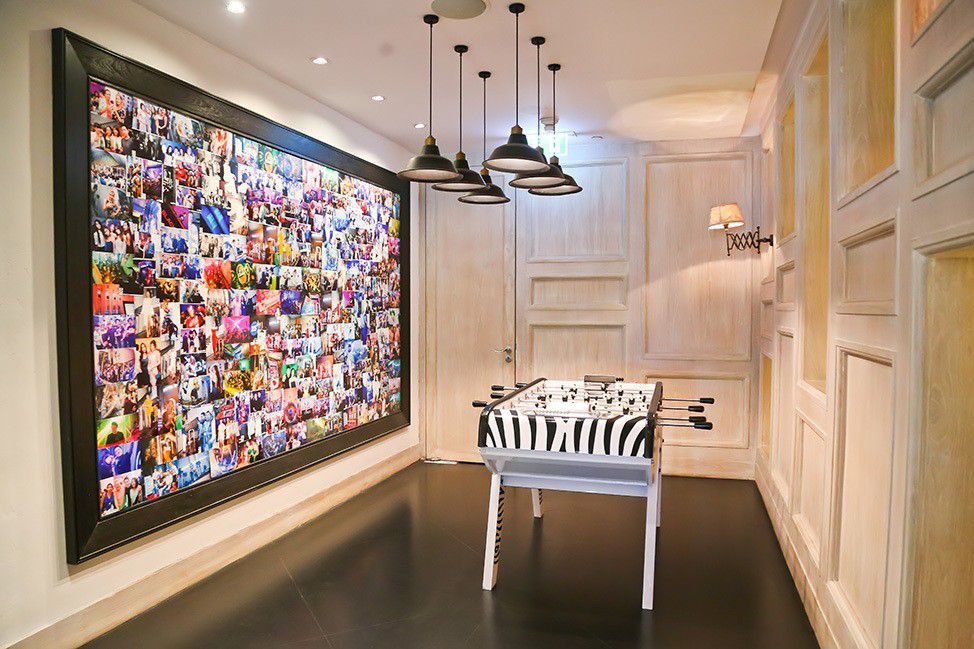 I’d seen photos of the chic all-white interiors here floating around on various travel blogs and in many Instagram posts, and it was high on my list of Bangkok hotels to finally check into myself.

Just be sure when you book that you know what you’re getting — it appears from booking sites that at least some of the hotel’s rooms haven’t been given the monochrome overhaul and look a bit dated. But fear not, [4], Agoda. 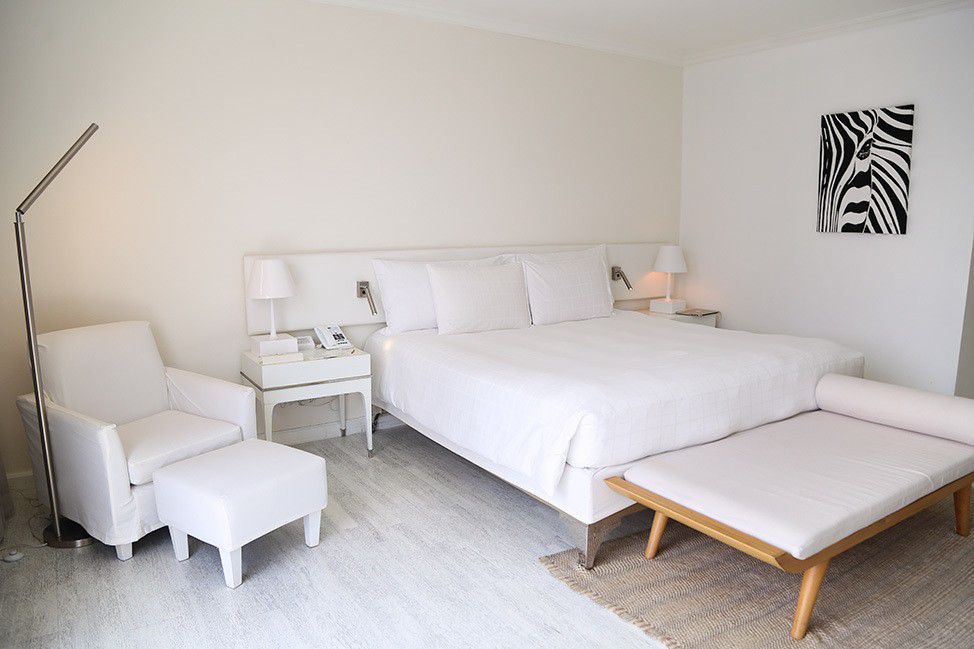 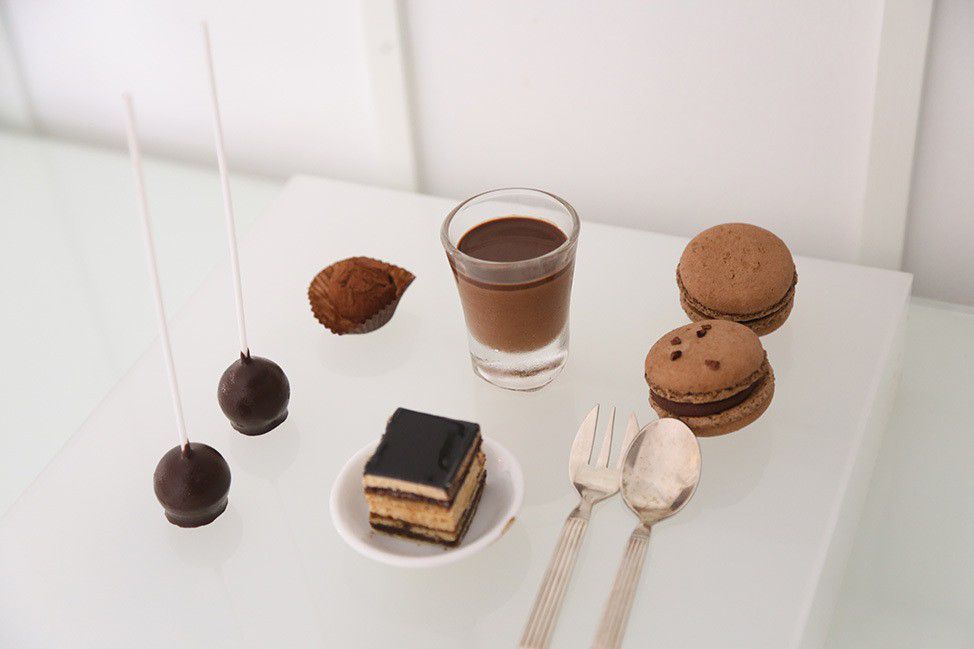 Thanks to a combination of white penny tile and CO Bigelow bath products, two of my favorite things, I spent much of our time swooning in the bathroom. (And seriously, I can think of few greater luxuries than a separate tub and shower — okay fine, I’m a simple girl.) 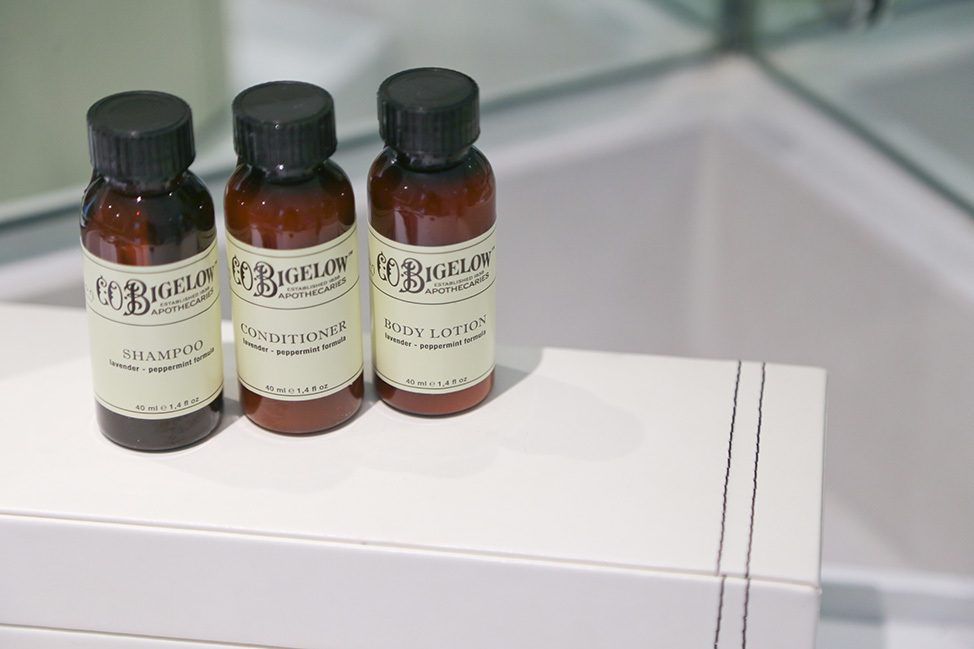 We had arrived from Koh Tao off an overnight ferry and very early morning flight up to Bangkok, which meant we were at very high risk for an unintentional afternoon nap.

So we decided to set off for a low-key activity to keep us on a regular sleep schedule instead. As two enthusiastic cinema buffs, we are always trying to check out new theaters, and couldn’t have been more thrilled to finally get the opportunity to check out the super chic Bangkok Screening Room[5]. We pretty much had the place to ourselves for the afternoon matinee of one of the theater’s standard offerings of indie, foreign, local, and otherwise non-mainstream movies. Read more on this offbeat theater[6] at Coconuts Bangkok.

After the movie we stopped for ice cream at Guss Damn Good[7], which I’d spotted on our way inside. A reference in the shop’s mural to Boston had me searching for the brand’s origin story[8], but regardless of how this little shop came to be, I was sold after one bite. Super creative craft ice cream is a rarity in Thailand, making this frozen treat well-worth seeking out.

While I’ve since learned they have several locations, I think this one would be hard to beat — it’s mere steps from Lumpini Park, the perfect place to stroll through while you snack.

After an ever so brief nap (we couldn’t resist!) we woke up to find that evening had arrived. And thanks to the miracle of social media, we’d made another discovery, too: one of my high school best friends, who had taken a spontaneous sabbatical from work and was hopping around Asia, was in Bangkok as well! 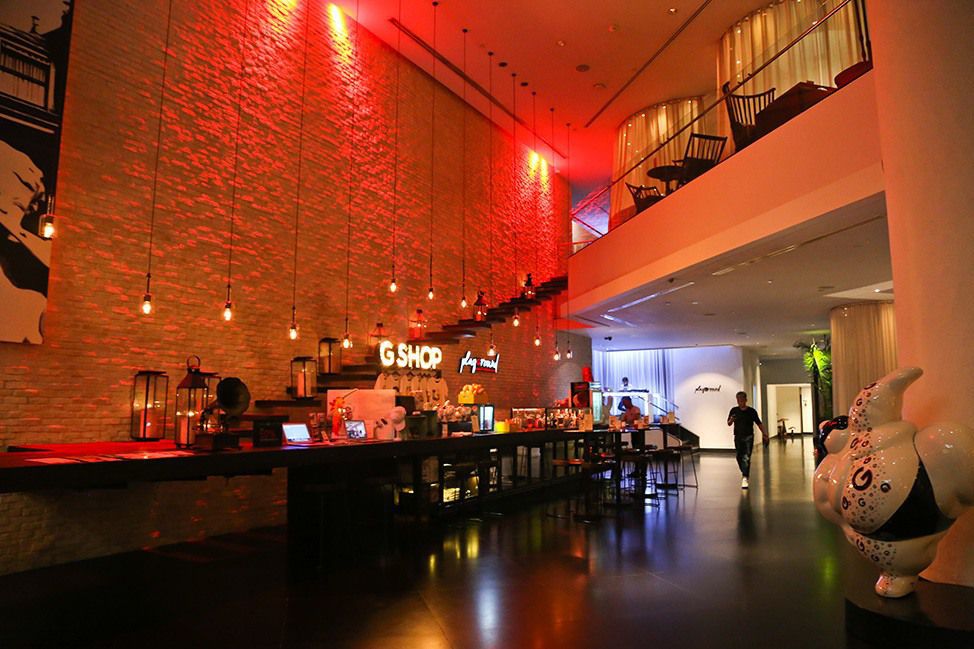 We quickly wrangled him for dinner plans at Namsaah Bottling Trust[9], which had been raved about to us by some of my most trusted Asia dining sources.

They didn’t let us down — housed in a shockingly pink house nestled down a side street in Silom, the colorful jewel box interior had be dazzled from the start, and the Alice in Wonderland-like menu of cocktails and shared plates amped up the fun. I loved it here and can’t wait to return — it’s perhaps my new favorite special occasion restaurant in Bangkok. 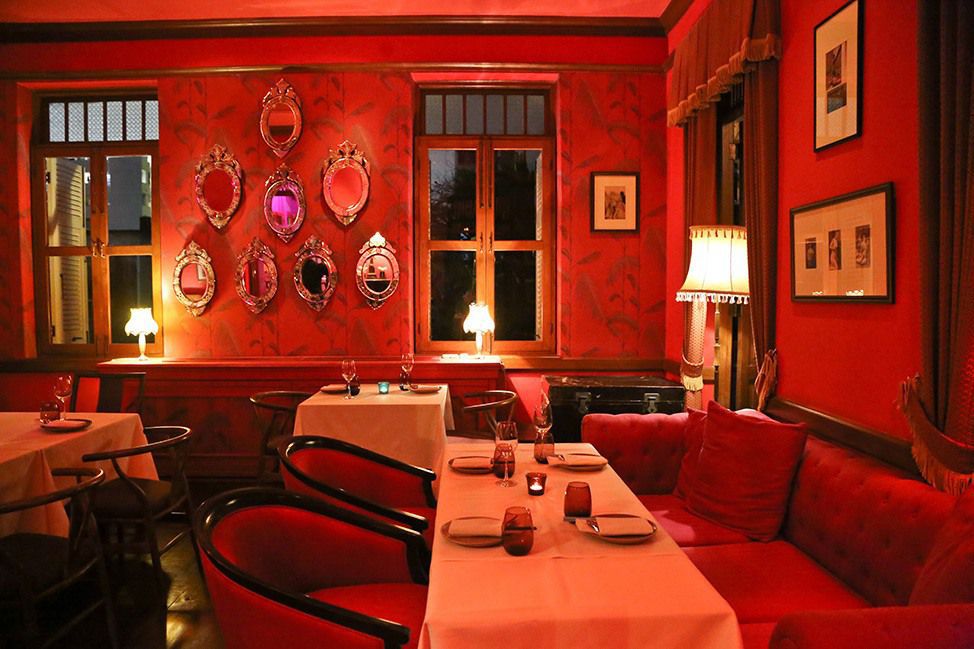 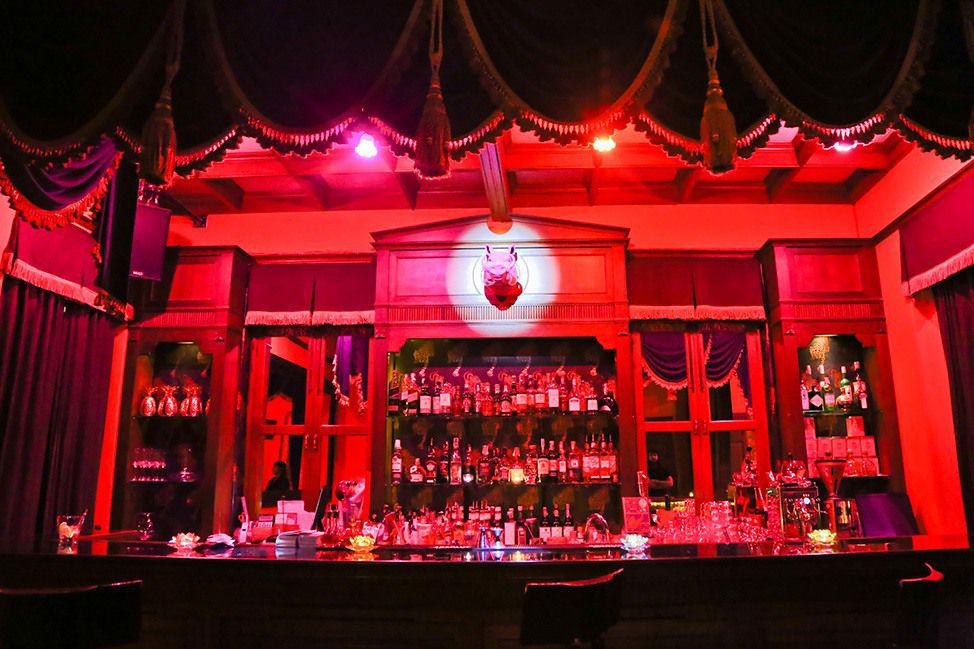 We couldn’t simply end the night there, but we didn’t want to venture far, so we headed down the road to Maggie Choo’s[10]. Designed by the same team behind our beloved Iron Fairies bar and inspired by 1930’s Shanghai, Maggie Choo’s has the feel of an underground vault, with qipao-clad waitresses handing out overpriced cocktails and perching on swings hung from the ceiling.

While the live music was lovely, we retreated to one of the private little vault offshoots to catch up — and escape the insane amounts of smoke (indoor bar smoking is one of my least favorite things about Thailand — yuck). Still, we had a blast and stayed till we were surprised to hear last call.

Once we were rallied and ready to face the day, we set off to explore a bit more of Silom. Bangkok is such a huge, sprawling city, every neighborhood is like a little town onto itself. And Silom is a delightful one to get lost it.

There was one destination that I was quite eager to go to in Silom, a place that I knew Ian was just angelic enough to entertain a visit to: the Unicorn Café[11]! Asia at large is known for its proliferation of insanely themed cafés — while Singapore specific[12], this article does a pretty good job opening eyes to the trend.

And y’all, this was one I just couldn’t resist.

Now, I love all things sequined and over the top and yet… it was a tad underwhelming. It felt like the inside of an early 1990’s Lisa Frank trapper keeper threw up, and I was very onboard for that. Yet perhaps my inner loyalty to my number one mystical creature, mermaids, was showing, but I found the place a bit dingy and the food, quite frankly, disgusting. But you don’t really come to places like this to eat, right? So we picked at our weird rainbow crepe cake, gingerly sipped our overly artificial “unicorn blood” slushie, took our funny photos and got outta there.

It was definitely worth the laughs!

Back at our hotel after an afternoon laptop session, we settled in at an establishment a little more our speed: a rooftop cocktail bar (maybe that’s the Unicorn Cafe’s problem: lack of booze.) Scarlett Wine Bar & Restaurant sits at the top floor of the Pullman Bangkok Hotel G[13] and dang if it isn’t one of the most hidden gem rooftop bars in all of Bangkok.

We kind of lucked out somehow with just wandering up and grabbing a seat before the crowds emerged — definitely make reservations if you want to sit on the popular terrace. While based on the name we assumed we’d be deciding between red and white, it turned out there was a pretty insane cocktail menu to chose from — I ended up with a concoction garnished with a piece of popcorn. In fact, it looked like it could have emerged from a certain unicorn-inspired cafe… though thankfully, it tasted much better.

When the sun concluded its final descent, we set off to meet my friend Shanna, one of my coding mentors in Bali[14], who I couldn’t wait to catch up with when I heard we were going to cross paths in Bangkok.

And we were in for a night of celebrations in honor of the high holiday, Cinco de Mayo! We made an exception to our “only in Silom” rule to try out The Slanted Taco, one of the city’s few Mexican restaurants we’d yet to try. Unfortunately it didn’t top our list of favorites — perhaps we’d ordered wrong, but none of us were totally crazy about our meals. But no regrets — it was festive and fun.

And while it wasn’t quite sticking to our Mexican theme — okay, not even in the slightest, but same hemisphere, okay? — we continued the party at Havana Social[15], once one of Ian and I’s favorite places in Bangkok.

I say “once” because sadly the place has kind of lost its cool speakeasy vibe. Where you once walked up to a pay phone in a dingy alley, entered a secret daily code obtained by calling a hotline, and watching a wall open in front of you to reveal a hidden club with a live salsa band and craft rum cocktails, you now line up in said alley in front of a bouncer, a long line, and a surly girl who charges you a huge cover and gives you a ticket for a crappy well drink. Ah, Havana Social, we barely knew ye.

They do still let you borrow these dope hats though.

The next morning we were back in Silom for our send-off brunch. We were catching our overnight cruise to Ayutthaya at a nearby pier, so wandered nearby to Luka[16], a brunch place we’d heard rave reviews of.

Turns out those raves were underselling it. Ian declared it his new favorite restaurant in Bangkok after mere bites and I had to agree, it was both stylish and spectacularly good.

The restaurant shares a space with a hip boutique that we couldn’t resist browsing while we waited for our bill. Over brunch, we’d discussed that we couldn’t believe we were already leaving Bangkok — it felt like we’d just arrived! Thankfully we had another two night stay at the other end of our trip but as usual, we left wishing we could have squeezed in a third night where we were. Two nights anywhere just almost never seems like enough.

Incredible food, an obligatory cinema stop, poolside lounging, rooftop drinks and friends from around the world? Yup, it was our classic weekend in Bangkok alright. I’d loved digging in and exploring a new neighborhood that I hadn’t known very well, and already couldn’t wait to return.

Next up, cruising up the Mekong to Ayutthaya…

Many thanks to Pullman Bangkok Hotel G for hosting us.

25 Best Things to do in Rishikesh for a Memorable Holiday