In Shimla, A Home of the Hills

At first glance, Chapslee resembles an old English site. Ivy climbs the stone walls of the time-worn bungalow, Popeye the pug hangs around with Labradors and other bigger pooches, and a neglected Fiat snoozes in the parking area. The minute I push open the heavy main door, I tumble back over a hundred years into the abyss of time.

Built in 1830 by a doctor in the East India Company, the house was renamed ‘Chapslee’ when it was sold to General Innes in 1848. Of all the historic events the place has seen, perhaps the most important was the signing of the Simla Manifesto in 1838. It was Chapslee’s last British owner, Sir Arthur Milford Ker, who expanded the then modest house, transforming it into Shimla’s finest residence as per the hill station’s first historical account published in 1904. It was purchased in 1938 by Raja Charanjit Singh of the current family that owns it, with roots in the royal family of Kapurthala. Singh refurbished the structure, adding priceless artefacts from around the world to make it what it is today. His grandson, Kanwar Ratanjit Singh and his wife Kanwarani Pronoti Devi opened the Chapslee school here in 1973, and their home as a heritage hotel in 1976.

I read much of this history, printed and placed in my room, soon after I plonk my bags and begin to take in the decor. The beauty of Chapslee is in the details—even the tiniest feature is a piece of art, from the ceramic rose on the dresser to the cherubic ceramic angels dancing on the bathroom shelves. A golden, wrought iron four-poster bed and a heavy brass centerpiece table adorn my grand room. I run my fingers over the floral wallpaper that has been painstakingly preserved for over a century, and take care to balance my dainty teacup without dropping cookie crumbs on the carpet. A gold-rimmed paper weight sits on my large, mahogany writing desk. I guiltily push aside the pen-and-ink stand and some Chapslee letterheads to make place for my sorely modern laptop. It’s one thing to be in a vintage hotel, but another to be in one which feels like a museum. 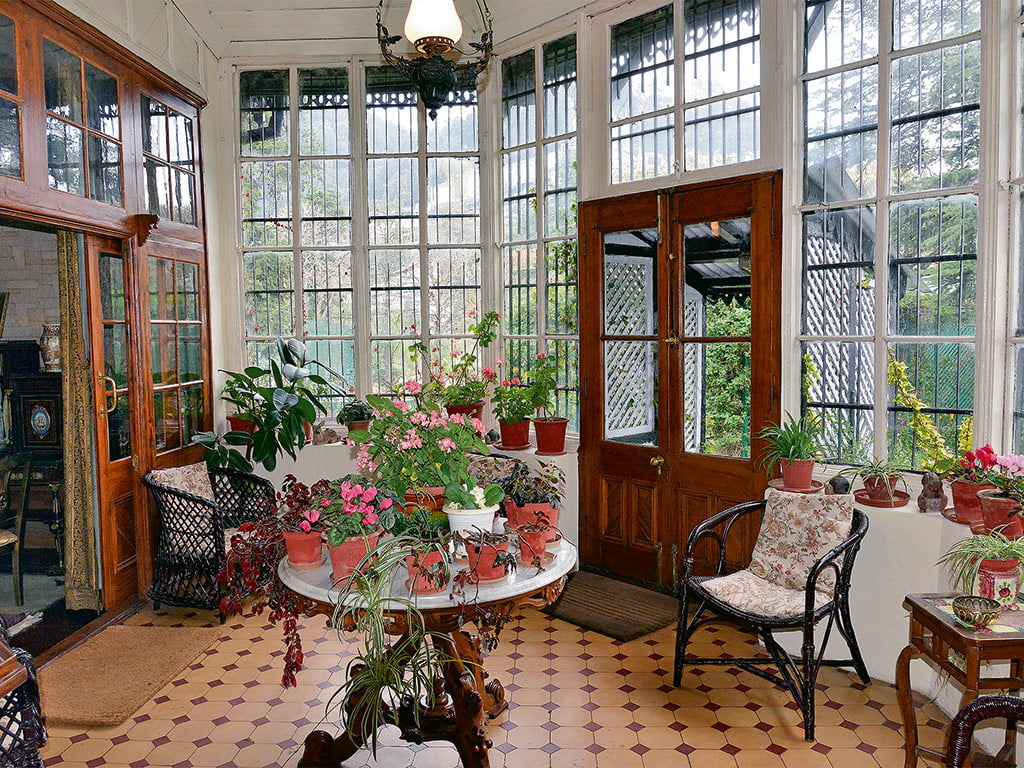 The hotel’s green corners are ideal for high tea, a sunny brunch, or a lazy afternoon read. Photo Courtesy: Chapslee

Kirti Tiwari, the senior mistress at Chapslee school, has taken time off to show me around. We wander about in the nine-bedroom house, four of which are private and the other five open to guests. After popping into the Pink and Yellow Rooms, we move into the Card Room to peer at the coin collection. The massive sitting area of Chapslee is complete with a grand piano, Flemish tapestries, silver snuffboxes and porcelain decoys, family photographs and flower arrangements. The dining area flaunts a rare silver spoon collection, 300-year old curtains from the Doge Palace in Venice, and enormous ceramic vases that lead the way to a glasshouse brimming with indoor plants. Tiwari leaves me to process the visual overload.

Later that evening, I ready myself for the famous Chapslee meal. Sitting at the head of the table, I try to read tiny inscriptions on the silver cutlery while waiting for my dinner. Finally, it arrives—a grandiose thali, in silver like everything else. There are at least six main dishes, most of which are family recipes. My first pick is the rich curried guava. The cottage cheese is exceptional, smothered in butter yet lighter than air, unlike most spice-laden North Indian paneer recipes I’ve sampled before. The spinach-steeped chicken is only made better with the saffron rice. The good old Anglo-Indian dessert—hot custard poured over bread pudding—takes me back to the traditional Chapslee kitchen, once known for its Continental fare too. 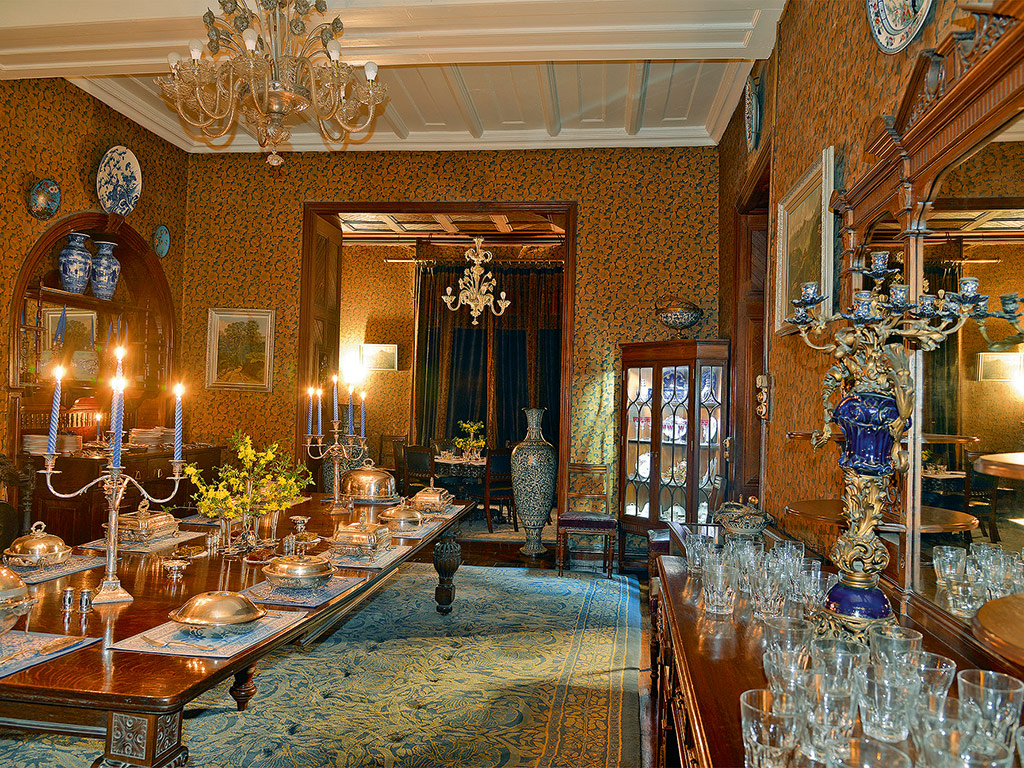 The dining hall at Chapslee is as opulent as any other nook, and serves delicious Indian cuisine. Photo Courtesy: Chapslee

The following day, I meet Pronoti Devi in the tearoom, which has Burmese teak ceiling and an antique chaise lounge. She began overseeing the goings-on at Chapslee after Ratanjit Singh’s demise. “Misfortune comes, but either you sink or you rise,” says the lady whose eyes speak louder than her otherwise demure stance. “Chapslee is special to me because I have a deep feeling for roots.  They cannot be recreated, but we can strive to preserve them and the history they carry.”

I return to my room and notice the hauntingly beautiful portrait above the mantelpiece. It is the legendary thumri singer, Naina Devi. She was Mrs. Singh’s mother-in-law, and she remembered her as a graceful woman of steel, from whom she had learned much. I look her up, only to find out that the room I’m sitting in was once hers. The photograph on my desk is of her sister—actor Sadhana Bose, to whom Naina Devi wrote long letters about her life in the Shimla of the early 1900s, far away from her home in West Bengal. Naina Devi went on to be the recipient of the Padma Shri, and mentored many musicians including Vidya Rao and Shubha Mudgal. How she rose to be a star in times when royalty shied from the stage, and that too being a woman and a young mother, remains a mystery to me. And I know then: I can pick any corner in Chapslee and a story will begin to tell itself.

To read and subscribe to our magazine, head to our web forum here or our new National Geographic Traveller India app here.