Port Barton Palawan – If you’re traveling to Palawan[1] and want to go island hopping somewhere that is not as popular as El Nido[2], Port Barton is what you’re looking for. It’s a tourist destination that is growing in popularity but that doesn’t get too crowded yet.
I heard about Port Barton in March 2016 from a Filipino guy in El Nido[3] and decided to go there and take a look. I loved the town, the heavenly beaches and the beautiful surrounding islands with very few tourists.
We’ll talk more about it later in this blog post, let’s figure out how to go to Port Barton and where to stay first.

Port Barton Palawan – How to get there?

The easiest way to go to Port Barton is to take a minivan from Puerto Princesa[4], the capital of Palawan. There are comfortable air-conditioned vans that make the trip from the San Jose station[5] in Puerto Princesa for 350 pesos (around $7). It’s a 3-hour trip and you’d better book your seat one to two days in advance through a travel agency. If you happen to have a local phone number, you can call the following numbers to book a seat in a minivan: 0905 485 8597 / 0909 351 3037. Here are the departure schedules:

Minivan trips to Port Barton ar also available from El Nido. It’s a 4-hour trip that can cost you give or take 700 pesos (around $13), depending your bargaining skills. Here are the departure schedules:

Hotels in Port Barton Palawan – Where to Stay?

Once in Port Barton, let’s find you somewhere to stay. By the way, since it is a new tourist destination that’s only starting to become popular in Palawan[6], Port Barton is still behind on accommodation and everything tourist-related. So if you’d like somewhere to stay, you’re going to have to book your room in advance because supply is far outweighed by the demand! 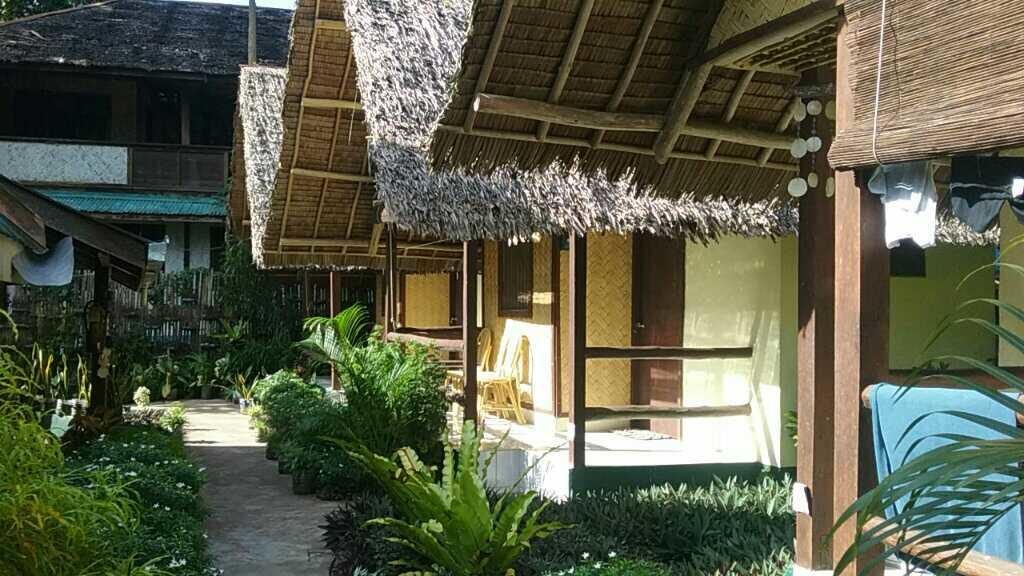 I booked a room in this nice hostel[7]. It’s very close to the beach, is set in a natural and quiet environment and offers just enough comfort. 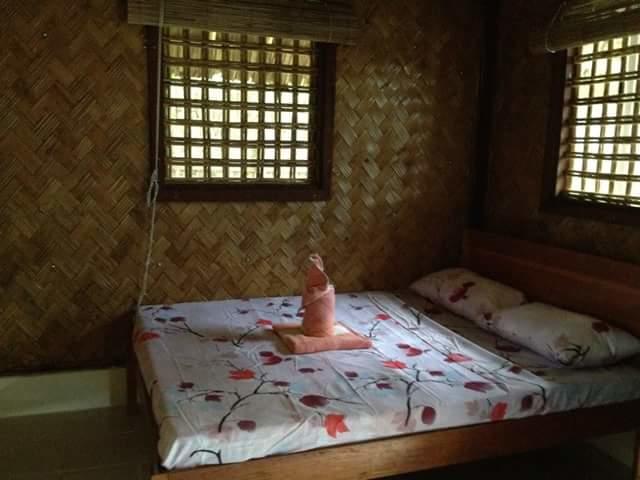 There are also a few resorts in San Vicente, 7 Km north of the Port Barton bay. The outstanding Sunset Beach Resort[8] is one of them and is located near a beautiful deserted beach. It’s a rather affordable resort[9] by the way. You can stay there for only $60 a night, which is next to nothing compared to El Nido[10]’s resorts!

What to do in Port Barton Palawan?

Port Barton has clean, sandy beaches that don’t get crowded with tourists…yet. So you’ll get to enjoy as much sea, sun and sand as you want without necessarily having to visit the surrounding islands. 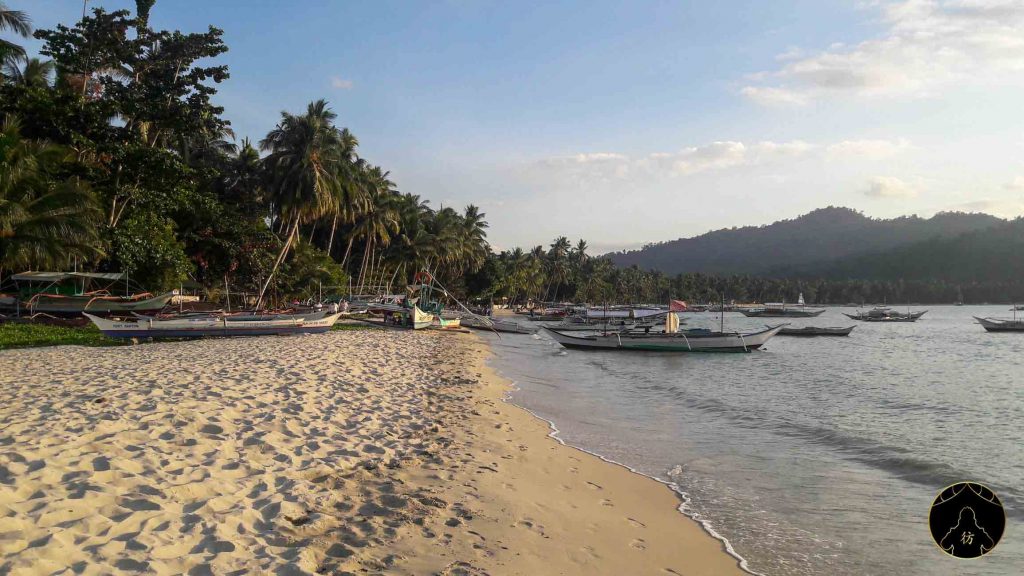 You can go for walks, you can swim, have a drink, enjoy yourself… and sit in huge, comfy chairs! 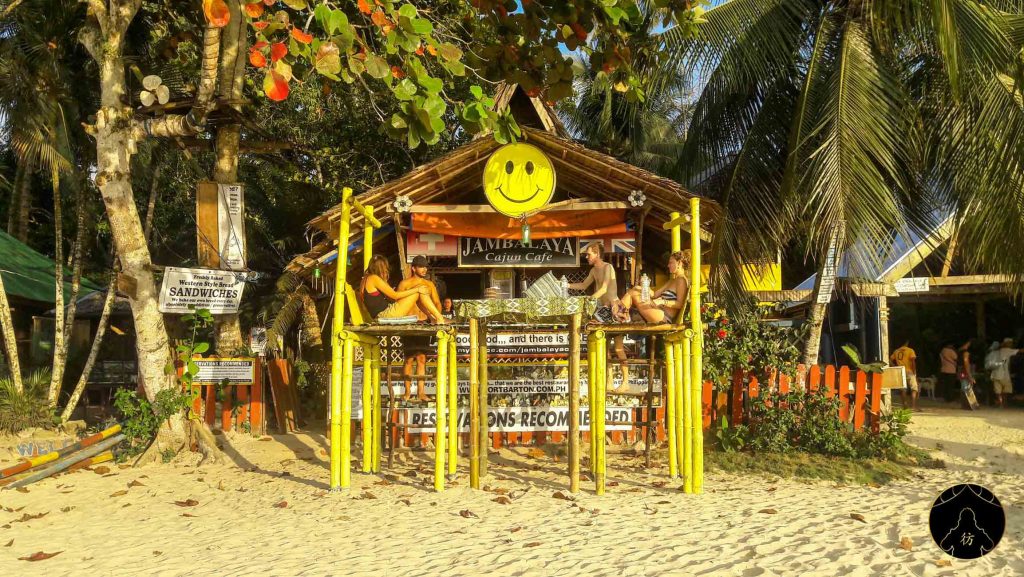 But just like in El Nido, island hopping is the most interesting activity you can do in Port Barton, and for that, many tours are available for you to choose from. 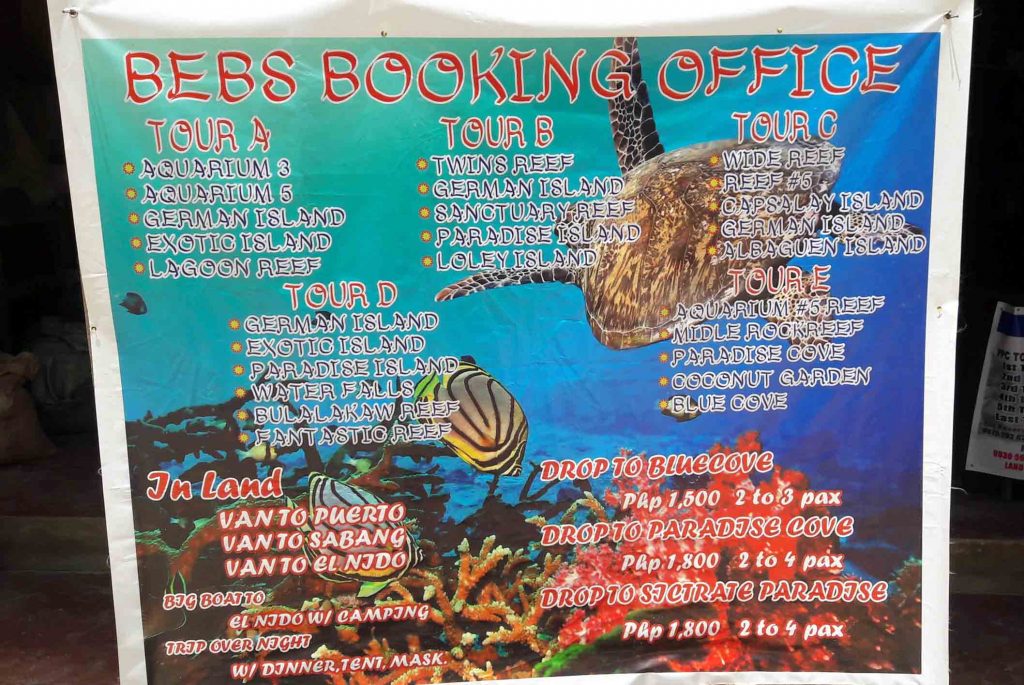 I tried tour A because it had snorkeling listed as the main activity and that’s what I was in the mood for, but the other ones seemed interesting too. Let me tell you how my tour went, you can then decide which one you’d like to try:

What’s waiting for you on tour A:

I paid the whole tour at the bargain price of $22. I did mine back in March 2016 so I’m guessing prices have gone up since then.
Port Barton is a small area so you’re supposed to be on the beach for the tour start but if you need someone to pick you up at your hotel (if you’re staying in San Vicente for example or somewhere in the vicinity), you can make arrangements for that too.
You’ll go on board a boat like the one you see in the picture with a group of 4 to 6 people. We were four people on board the boat I was in and our trip started at 9AM. 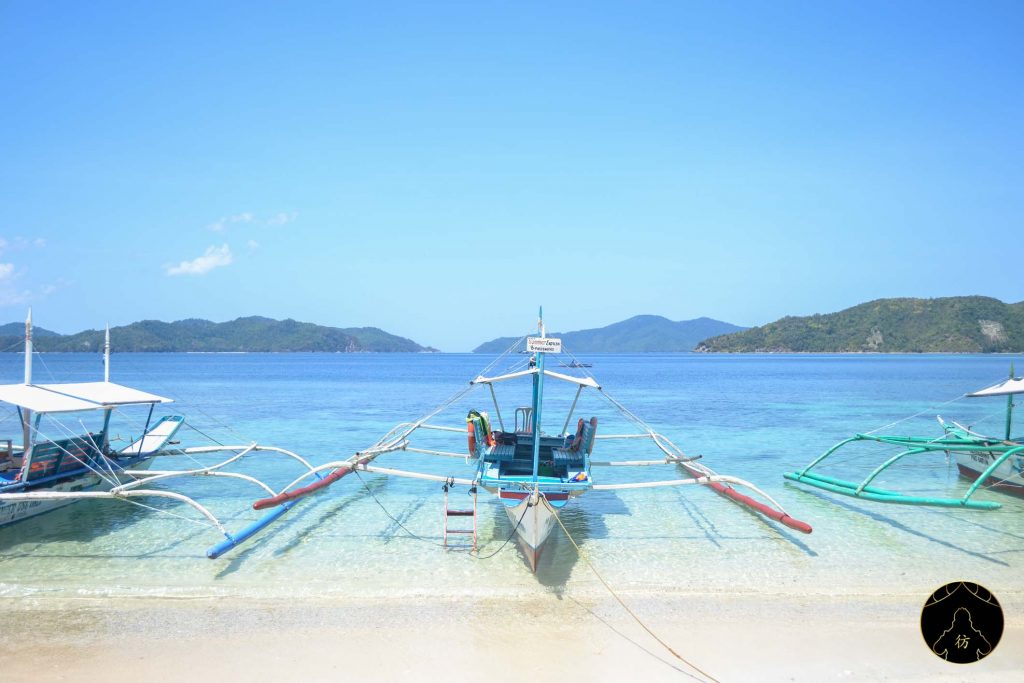 Before visiting the surrounding islands, you will stop at two snorkeling spots and will be blown away by the area’s amazing seabed. .They call them aquariums for a reason!

I didn’t have my GoPro to film everything but it was absolutely amazing. I saw a sea turtle, countless colorful fish and a black and white sea snake I followed for a while. I haven’t had such intense snorkeling moments in a long time!

Swimming got us very hungry so we got back on the boat, passed by German Island, and went to Exotic Island to have lunch. 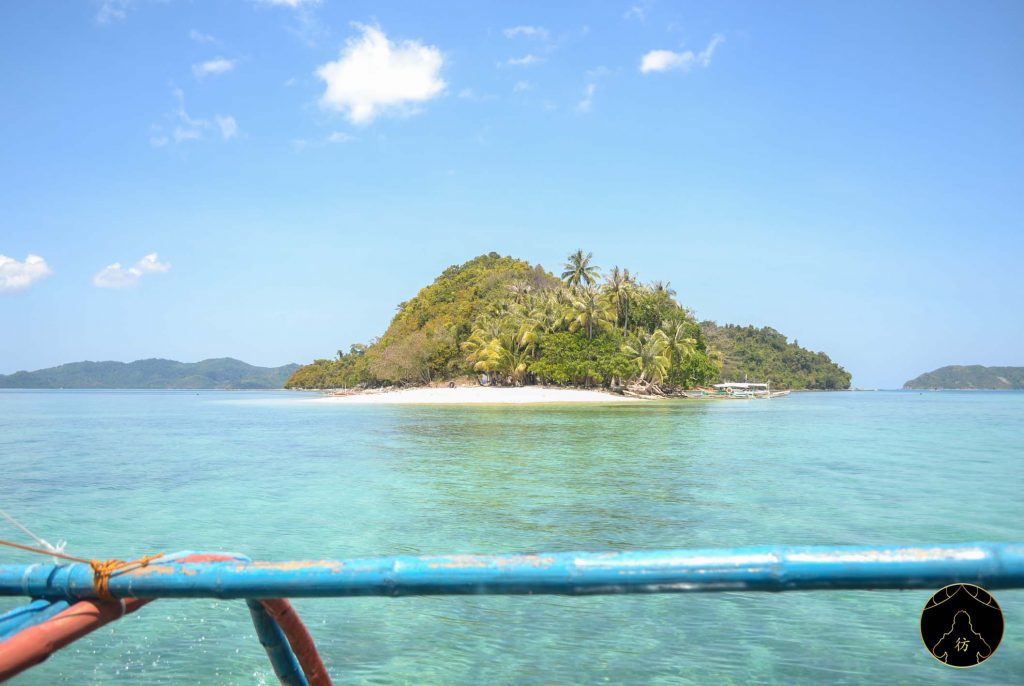 …but I was hungry so back to Exotic Island, which you can see on the right in the picture below, next to Paradise Island on the left. 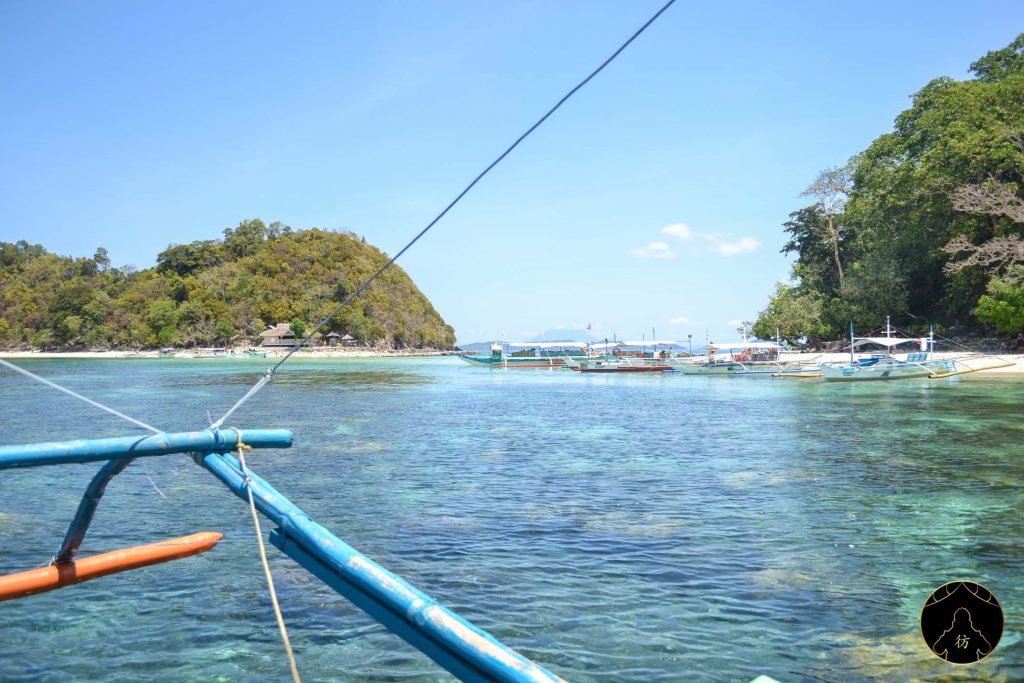 As you can clearly see from the picture below, you can easily swim to go from one island to the other.

You will be served fish (obviously), rice and vegetables for lunch, with delicious mangoes for dessert. 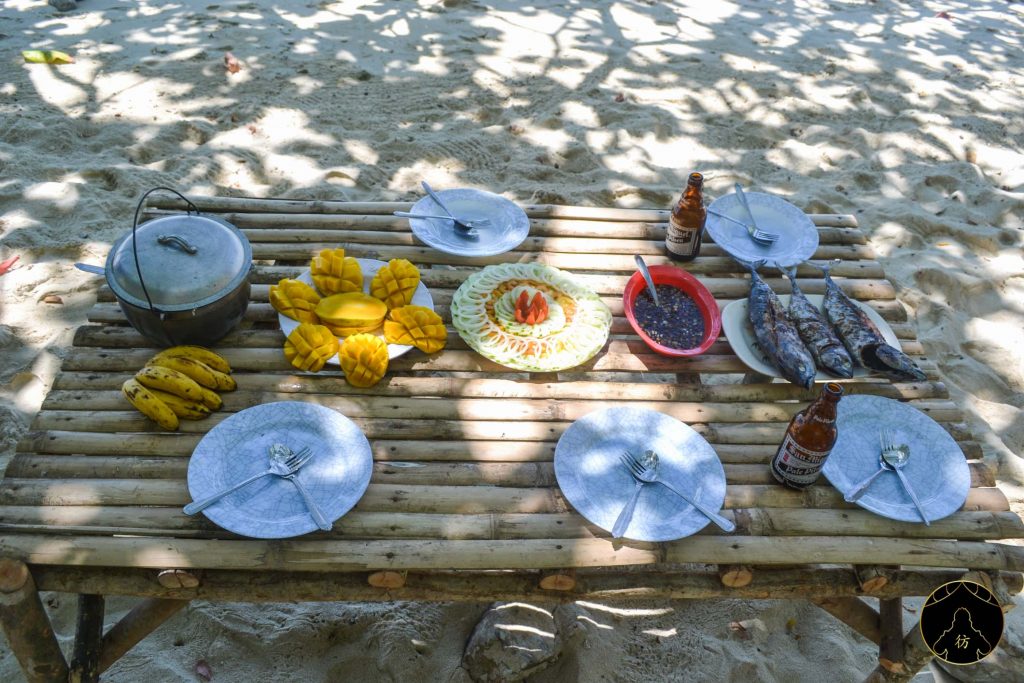 It’s time for a nap! How about some quiet time in a hammock under German Island’s coconut trees? Apparently, it’s a private island owned by a German guy, hence the name. I haven’t checked if it’s a true story or not so if you know anything about it, let me know!

Anyway, it’s a very nice island, quite small but very enjoyable. You can snorkel around the island but beware of jellyfish. I saw quite a few all around German Island, I’m not sure why there were so many.

You will get back to Port Barton at around 3PM. I had a lot of fun and I kind of lost track of time so I really recommend tour A for those of you who are interested in island hopping around Port Barton. If you have tried any of the other tours, please share your experience in the comment section below!

So let’s wrap this up! Port Barton will give you breathtaking landscapes to enjoy all on your own. It’s like a much quieter and less crowded El Nido[11]. I’ve been to both places so I won’t tell you to avoid El Nido altogether because it has amazing lagoons you should abosolutely visit if you get the chance to. So here’s what you could do: instead of going on two boat trips in El Nido for example, try only one there and go for another one in Port Barton.

What’s also very convenient is that if you’re going to El Nido from Puerto Princesa[12], you can stop by Port Barton on your way to and back from El Nido. Personally, I went to El Nido then headed south and stayed 3 days in Port Barton.

See you around fellow travelers!

El Nido Palawan – A Beautiful Piece of Paradise in the Philippines

Thailand welcome its 38.26 millionth tourist to the Kingdom

Tagaytay Philippines – The Best Things To Do + More Travel Tips

Batanes Philippines – All Our Travel Tips To Visit These Lovely Islands

Best Beaches in Philippines – 7 Dream Destinations You Should NOT Miss

Why You Should NEVER Take A Starfish Out Of The Water!

Sorry. No data so far.