– Puerto Princesa is the main gateway to the Palawan archipelago in the Philippines. It has the biggest airport in the region but let’s keep things in perspective; it’s a rather small airport and it has only one runway.

As a destination, Puerto Princesa is the most convenient city to visit if you’re planning to explore Palawan’s natural gems, namely El Nido[1] or Port Barton. It’s still a very interesting city to explore on its own and we’ll come to that in a minute but first, here are a few useful tips to know before coming to Puerto Princesa. 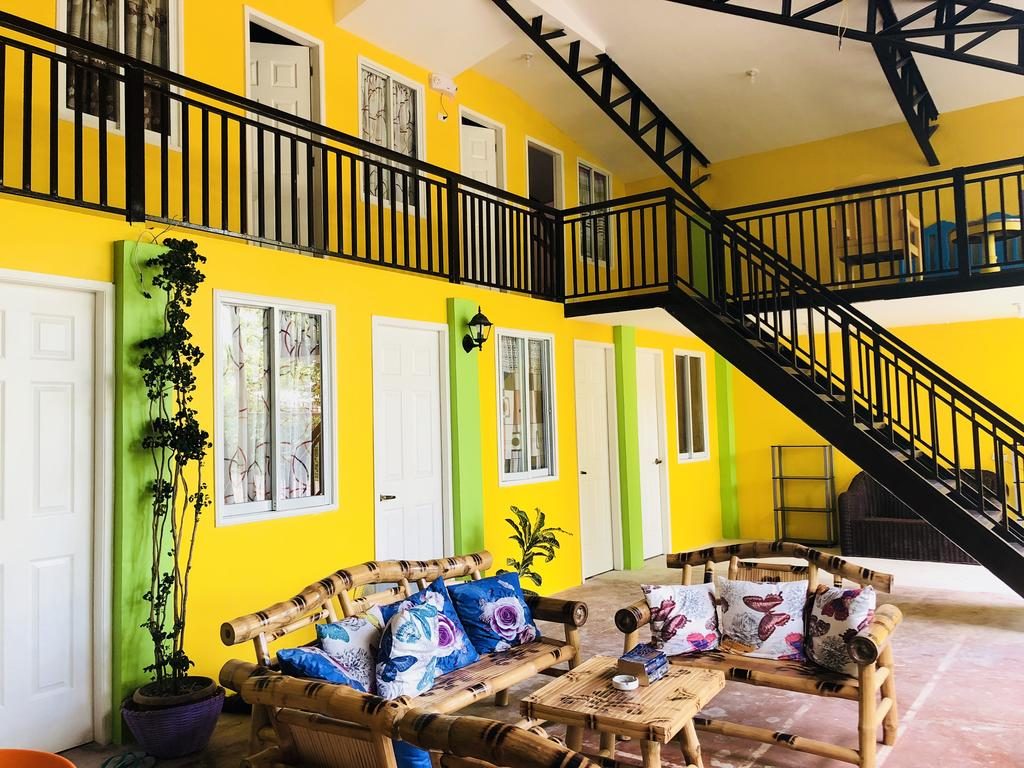 If you’re a backpacker looking for a cheap place to stay, this hostel[2] should have everything you need. The mixed dorm rooms have air conditioning and cost around $5. The whole establishment is clean and tidy and dorm rooms are rather comfortable. 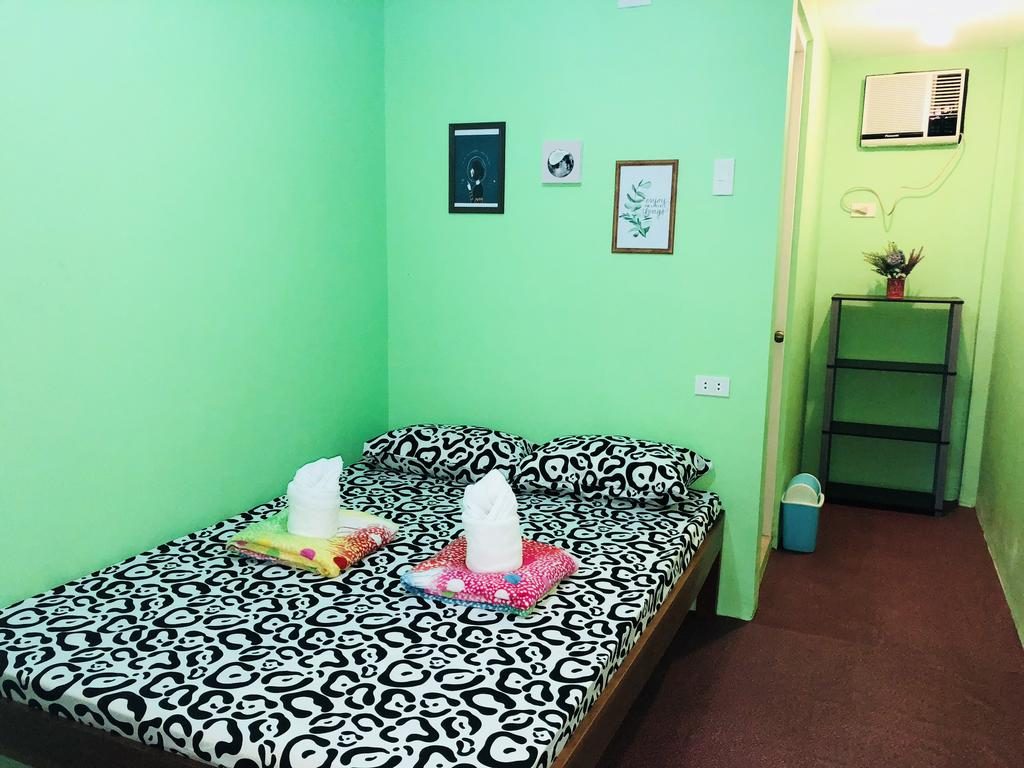 If you’re traveling with a partner, you can find double-bedrooms there but you should book your spot as soon as possible, it gets crowded really quickly. 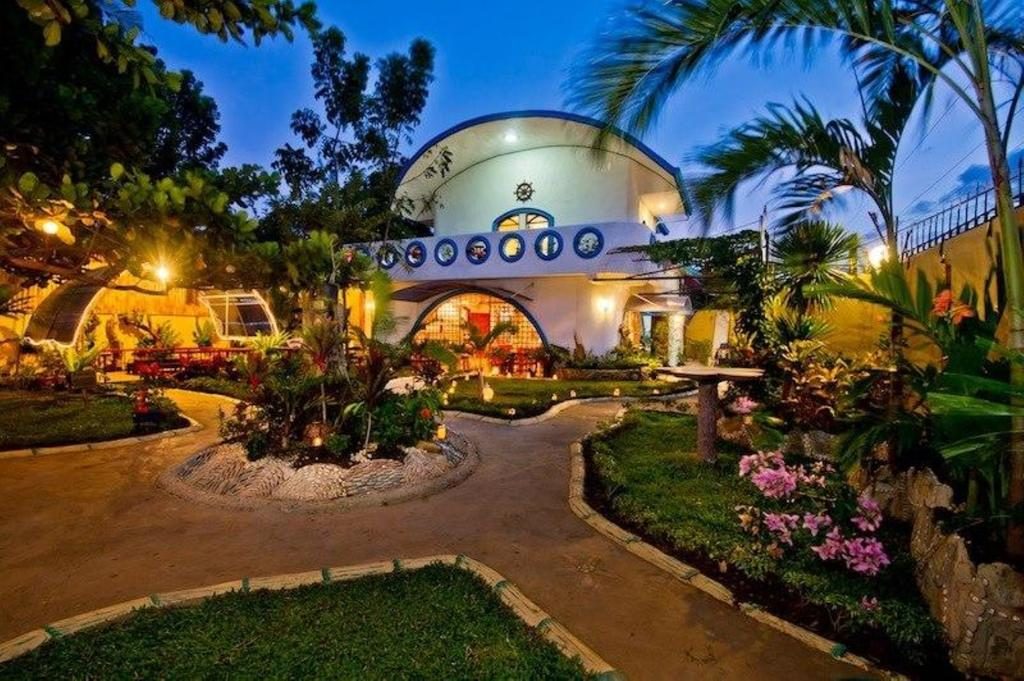 There many great hotels in Puerto Princesa. I visited this beautiful resort[4] where two Dutch friends of mine were staying. 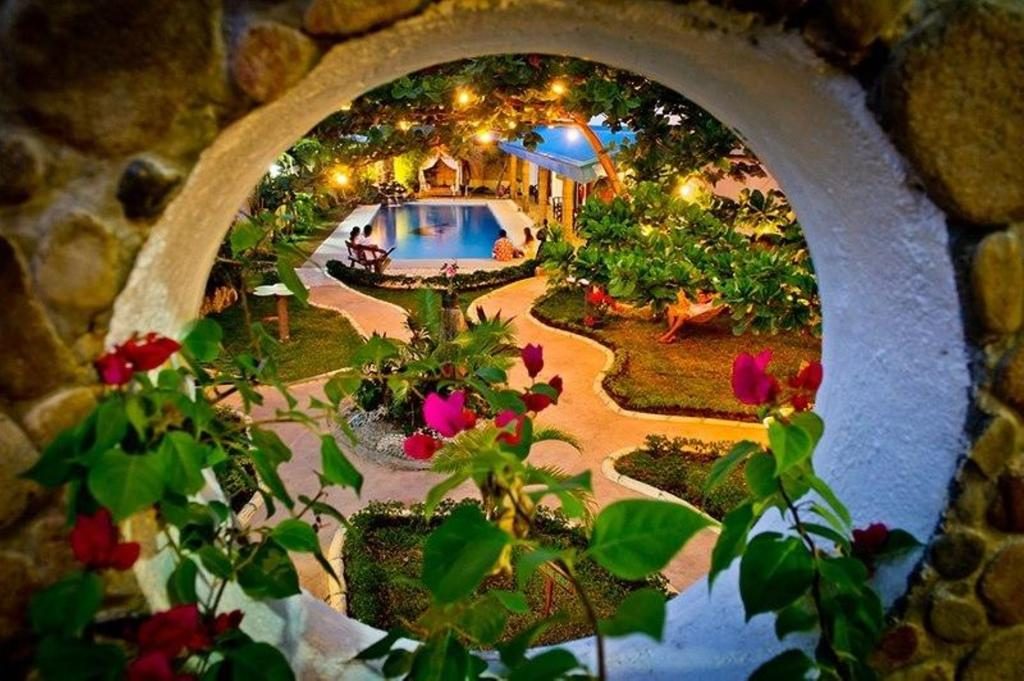 What I liked about it was the fact that it wasn’t huge and that I could instantly feel comfortable in there. The hotel’s staff was also very friendly and made me feel welcome so I guess it added to the warmth and hospitality of the whole place[5].

The Puerto Princesa International Airport is right at the center of the city. In fact, the city was built and evolved gradually around the airport as soon as its construction was over, not the other way round. You’ll most certainly see or hear an airplane either landing or taking off once an hour. Surprisingly, the noise is rather bearable and it’s probably due to the fact that only small airplanes fly to and from Puerto Princesa.

To get to your hotel from the airport, the tricycle is the best means of transportation you can use. It’s like a motorbike that has a third wheel or drags a sidecar (depends on how you look at things) and that can transport a total of four people, excluding the driver. 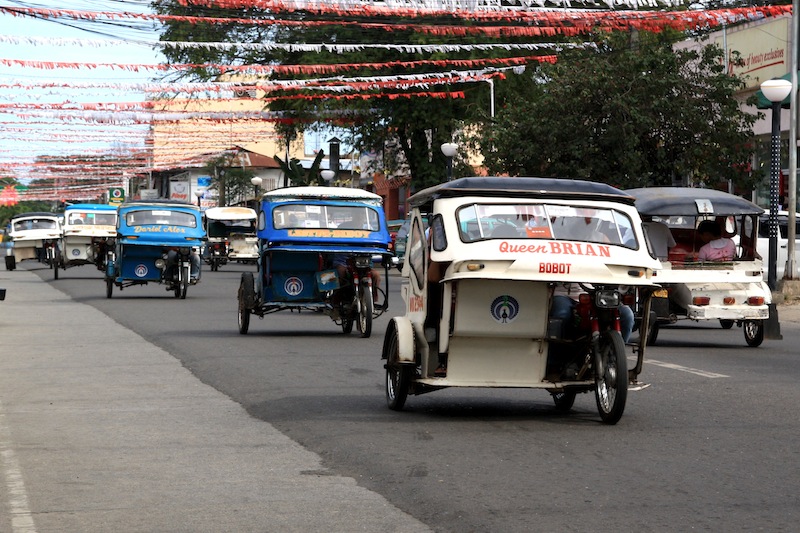 You read right, four people on a tricycle; 3 in the small sidecar you can see in the picture above and one more customer behind the driver. Thrills and spills ahead! And by the way, you don’t need to look for those funny-looking beasts, they’re the ones who will find you! They’re almost everywhere in town and especially around the airport. If you get away from the crowd and leave the airport, you can find one almost immediately on the street. If your hotel is in town, the tricycle trip shouldn’t cost more that a dollar. 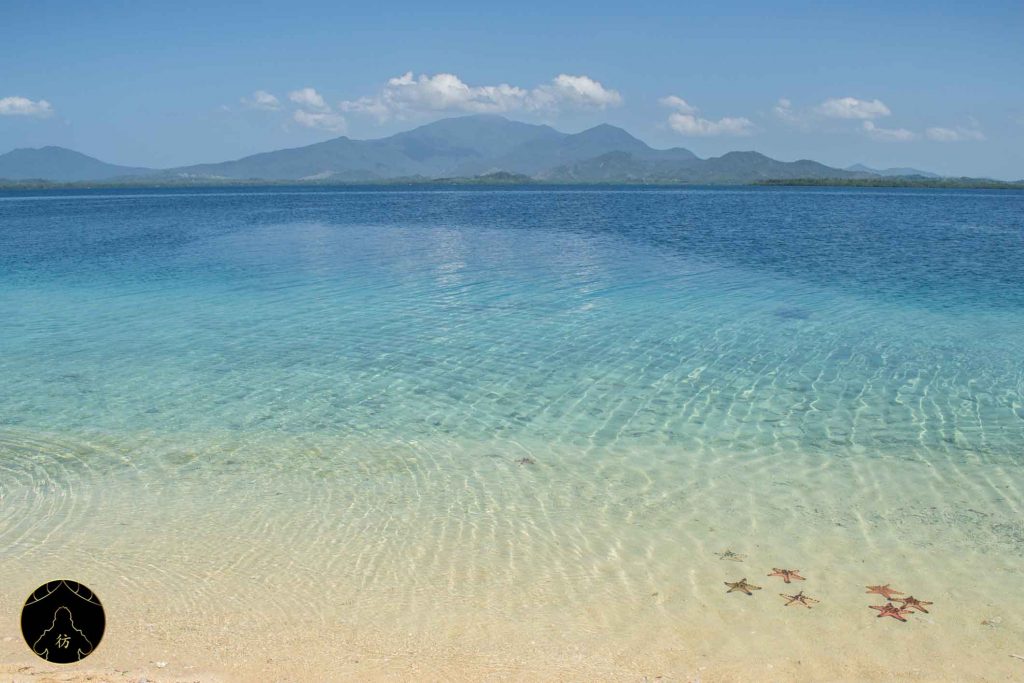 This was my favorite of all attractions in and around Puerto Princesa. It’s a bay located 30 minutes away from Puerto Princesa with many beautiful surrounding islands. There’s an island tour where you can visit the following three:

To avoid scams from local travel agencies, I always recommend to book your tour online[6] to make sure you don’t get tricked.

Here is what is included in the tour:

Snorkeling equipment rental fees are not included in the tour price so if you’re planning on doing some snorkeling, plan ahead and set aside some money for that. You will stop at a store where you can rent masks and tubes but I recommend you wait until you get to the wharf and rent your equipment there because it’s cheaper. Renting snorkeling equipment can be up to a dollar cheaper at the wharf ($2 mask compared to $3 at the store).

Here’s the kind of boat you should expect to cruise on. It can carry up to 8 people (I remember we were 6). 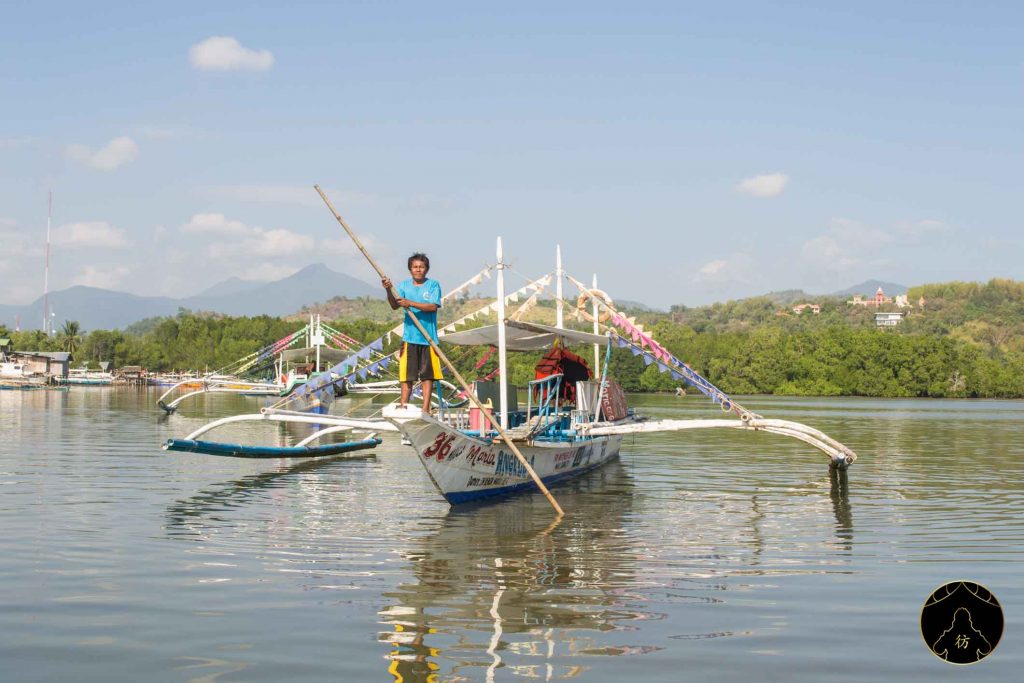 And here’s a video of the wharf we set sail from!

You’ll start by visiting Starfish Island which is, as its name suggests, surrounded by beautiful starfish. 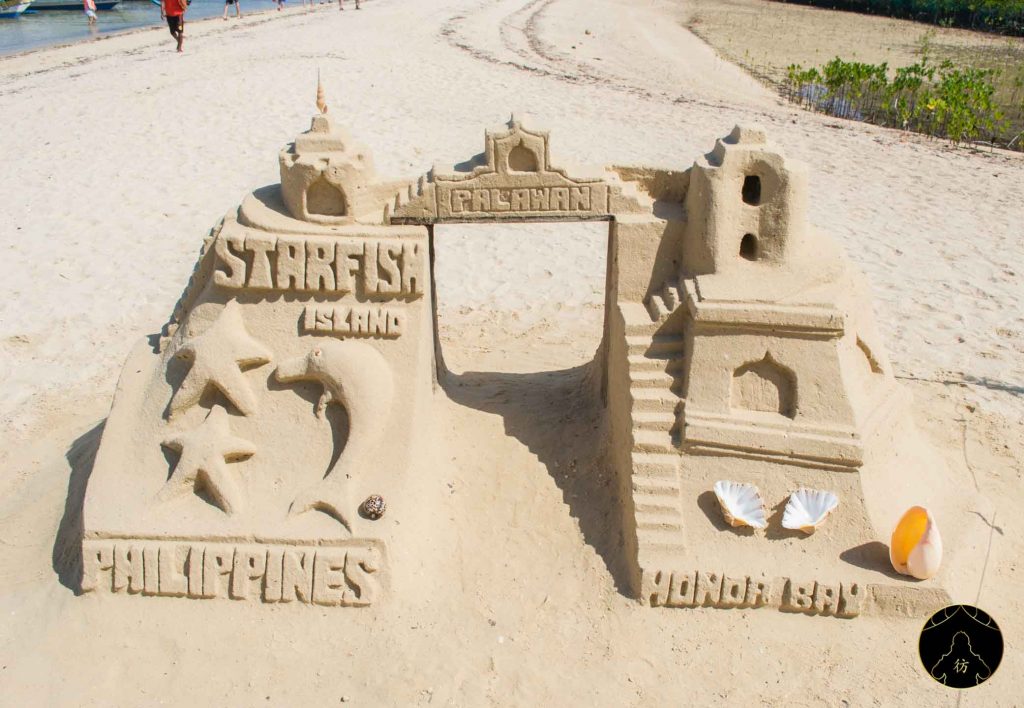 For your information, starfish are animals that need to stay under water to be able to breathe, just like fish, so avoid getting them out of water because they can easily die asphyxiated. 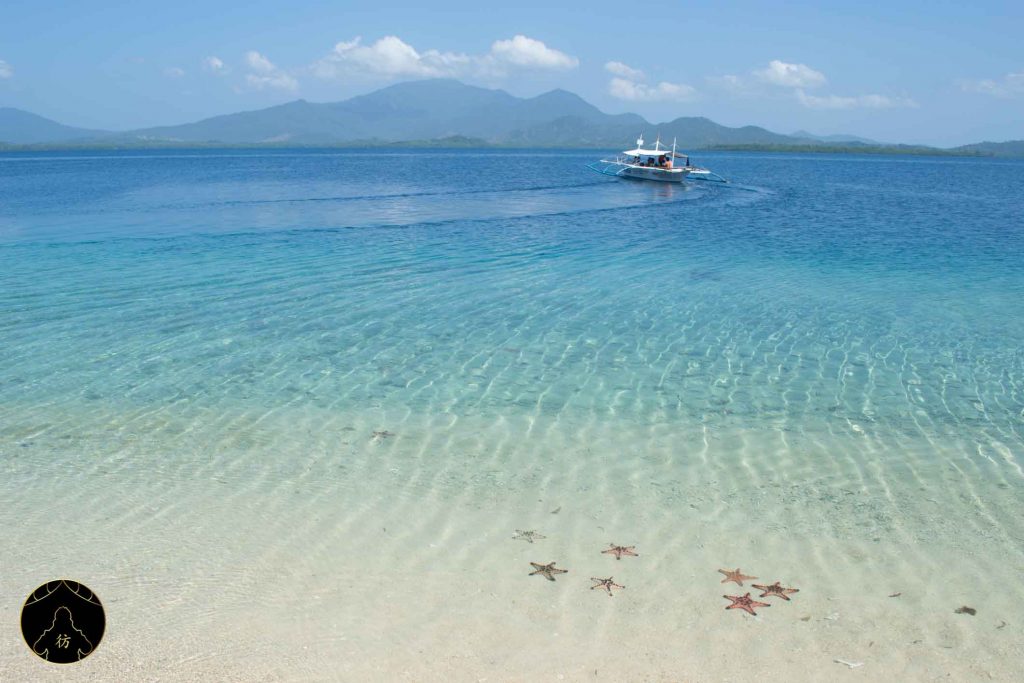 You can also snorkel around Starfish Island, the fish there are amazing! All kinds and sizes, I can guarantee you that. You’ll also find huts where you can rest in the shade for a while before getting to the next island.

Next, you’ll go to Luli Island, known for its many beach flags. There’s also a bar where you can buy refreshing cocktails. 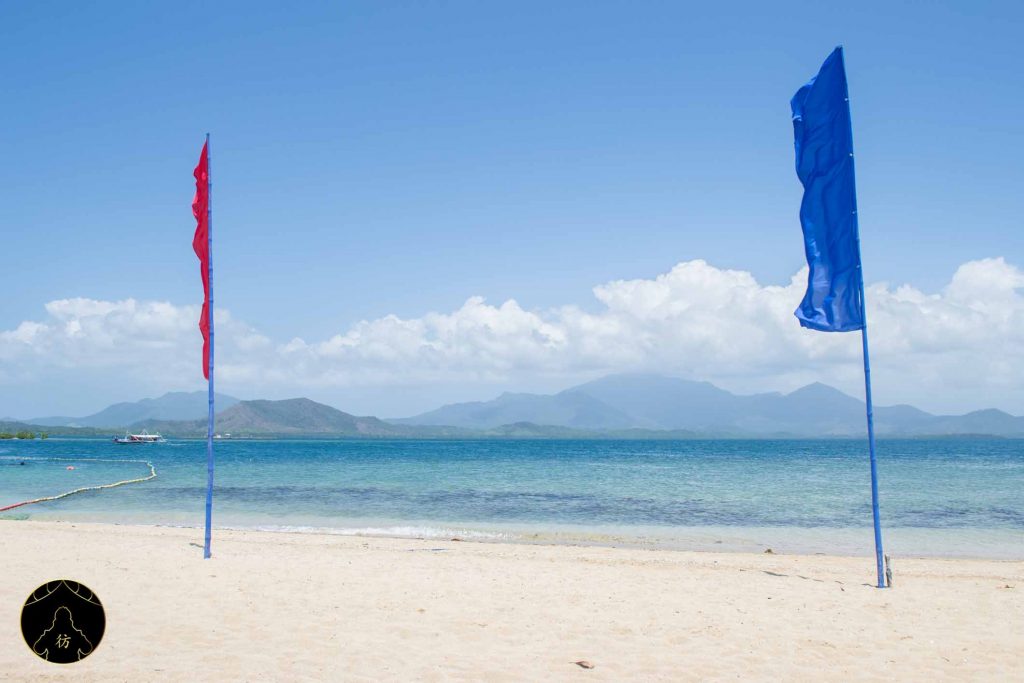 You will only be allowed to swim in this part of the sea to avoid walking on stonefishes, those fish that look like rock but sting like venomous hell. Don’t panic, just be careful where you walk and only swim where you’re allowed to. 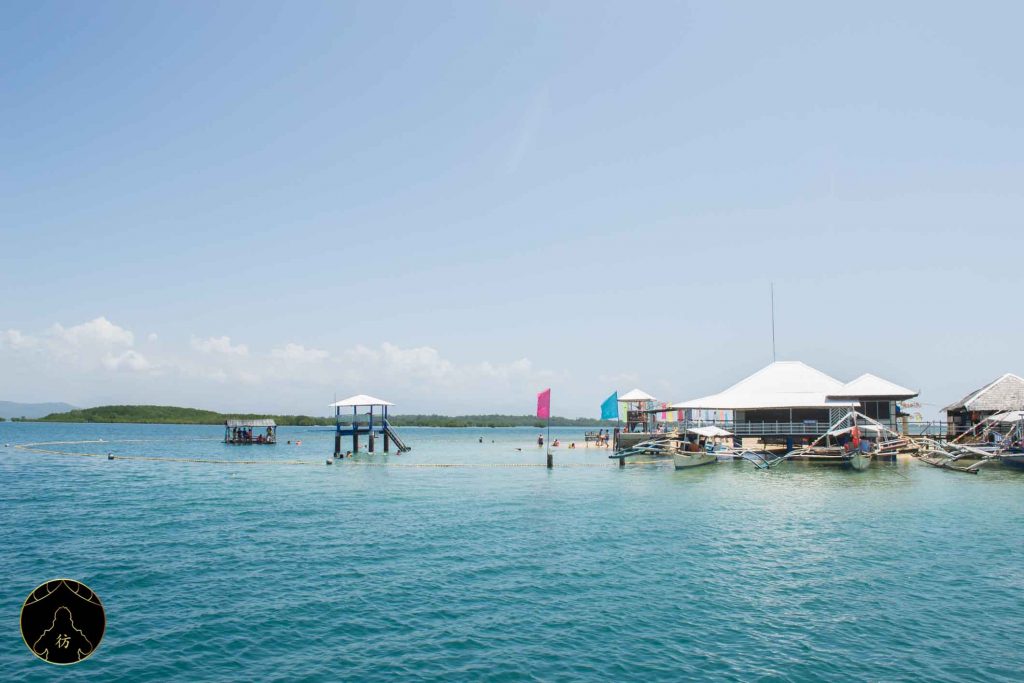 You’ll finally visit Cowrie Island and have lunch there. The buffet will be included in the tour’s price and you’ll have unlimited access to various different rice or noodle dishes. 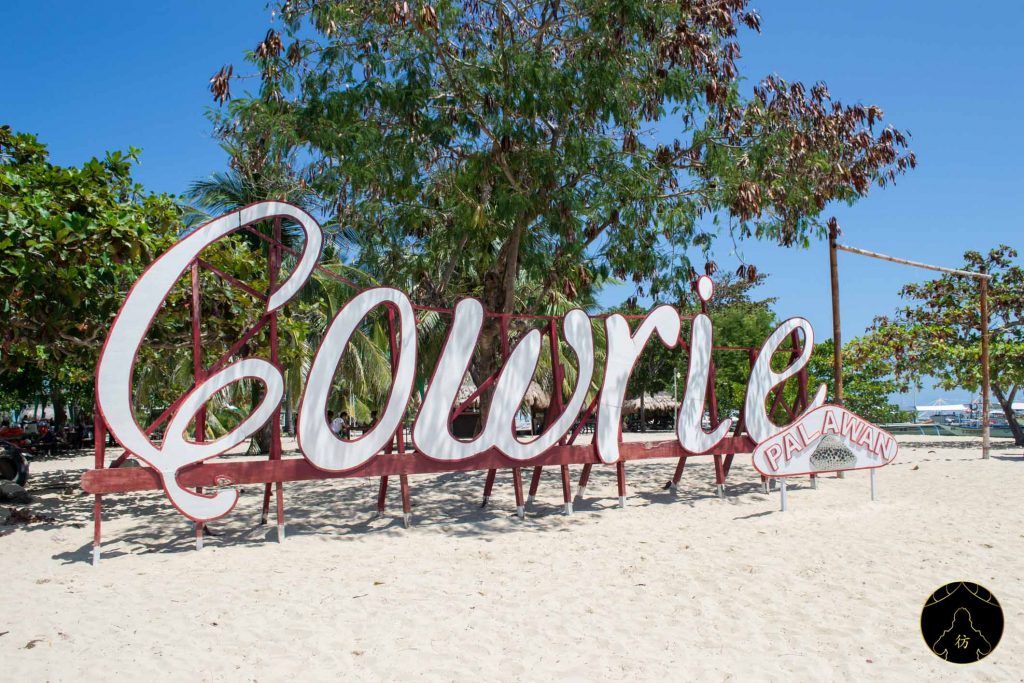 There are also many activities you can do in Cowrie Island, you can play volleyball, snorkel, take a kayak trip, enjoy a massage session or even get a henna tattoo.

I really enjoyed island hopping in Honda Bay. I went there with a friend on a Sunday. It wasn’t crowded at all and the people we met were local people. So if for whatever reason you can’t go to El Nido for example, you can still enjoy nice beaches in Honda Bay. 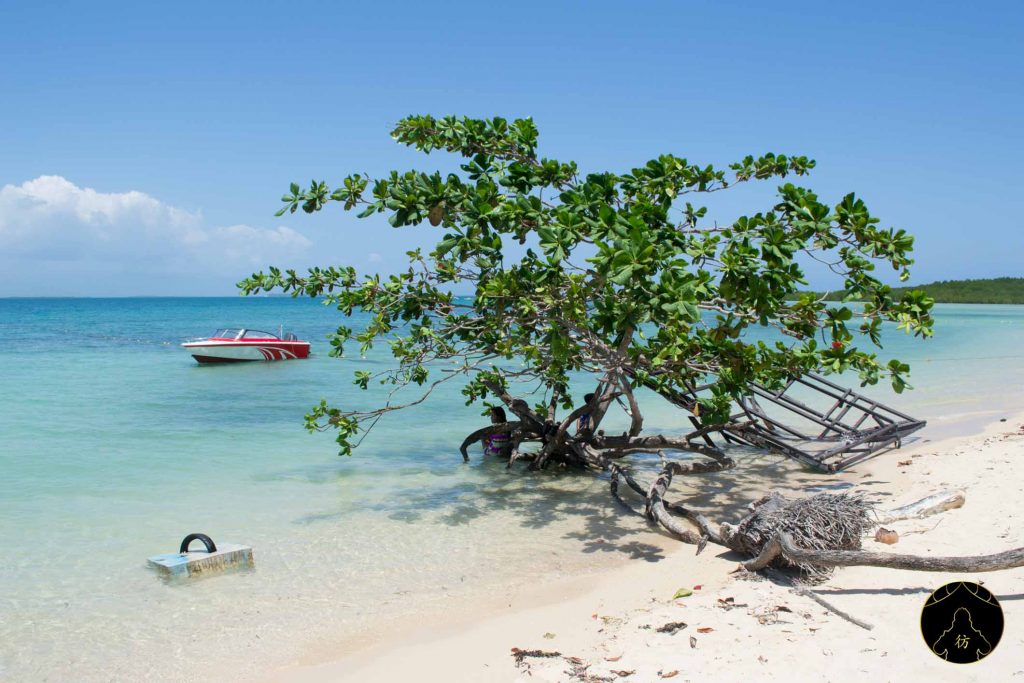 The Underground River is another popular attraction in Puerto Princesa. Recently voted among the new wonders of nature, it is located a 2-hour boat ride away from the town of Sabang. It is also listed as a UNESCO World Heritage Site.

Organized one-day tours[8] are available from Puerto Princesa to the Underground River. A minibus will pick you up at your hotel and drive you to the town of Sabang where a boat will get you to some sort of cove (that is only accessible by sea) leading to the underground river.

You can book your ticket online here[9]. 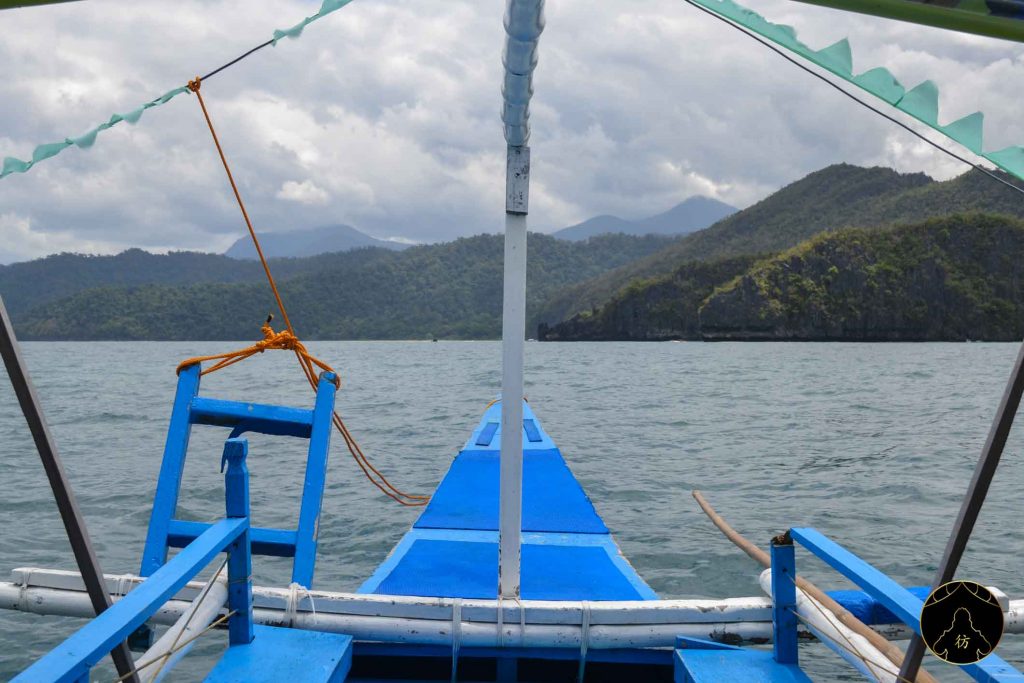 You will then walk across the famous Puerto Princesa Subterranean River National Park through a forest path for a few minutes. 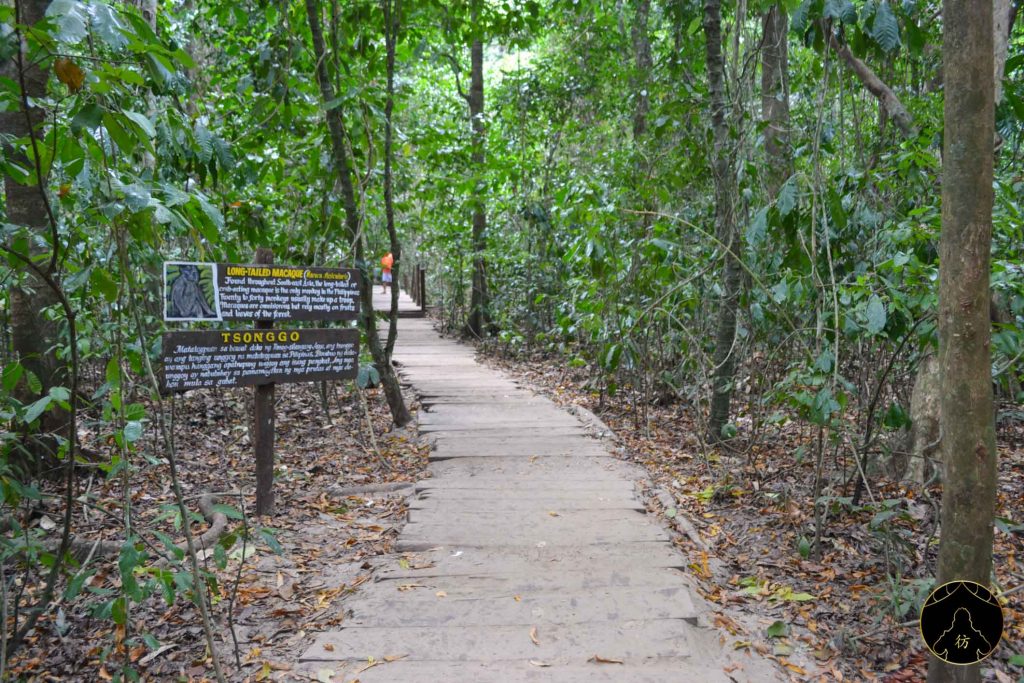 As the sign indicates, you’ll probably come across a few monkeys so make sure your bags or purses are closed and keep them by your side. The monkeys are cute but irresistibly curious and can grab your stuff if you’re not careful. Don’t expect to get anything back from a curious monkey! 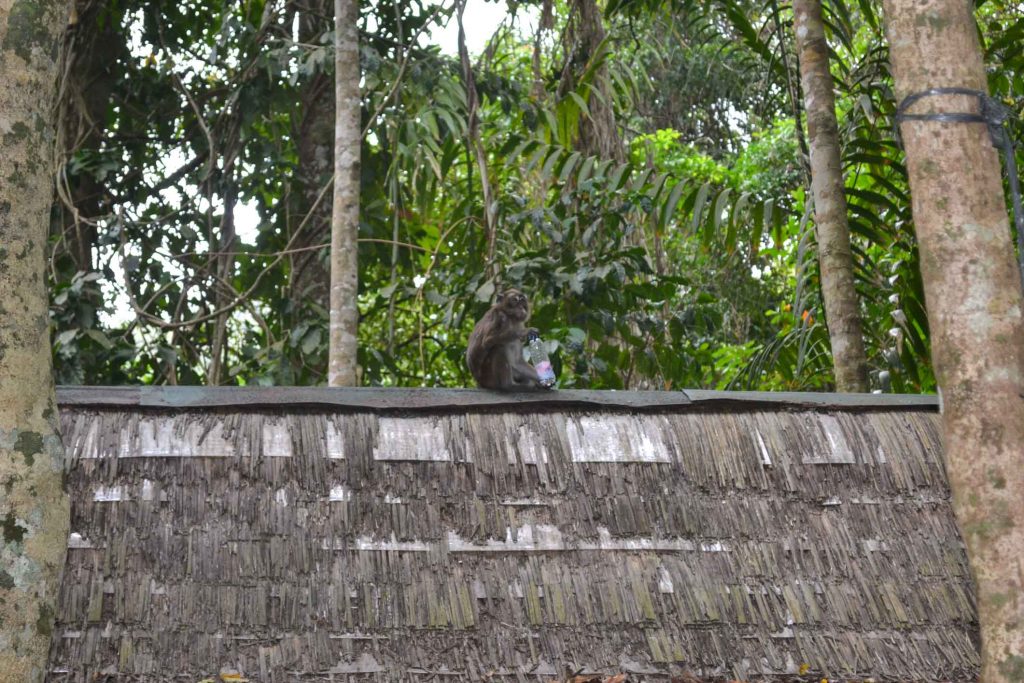 Once you’ve crossed the forest, you will hop on a boat and get to the river’s entry. 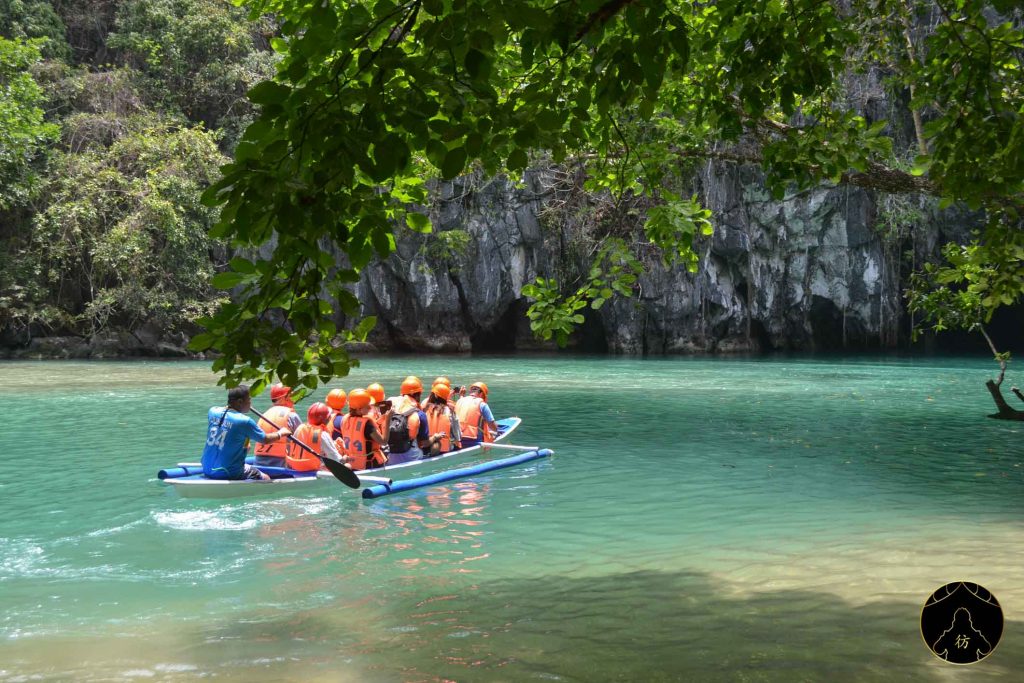 The tour inside the underground river last about half an hour. Don’t forget your earphones to have access to the voice prompts in your language. The information shared is interesting and useful when visiting the cove. 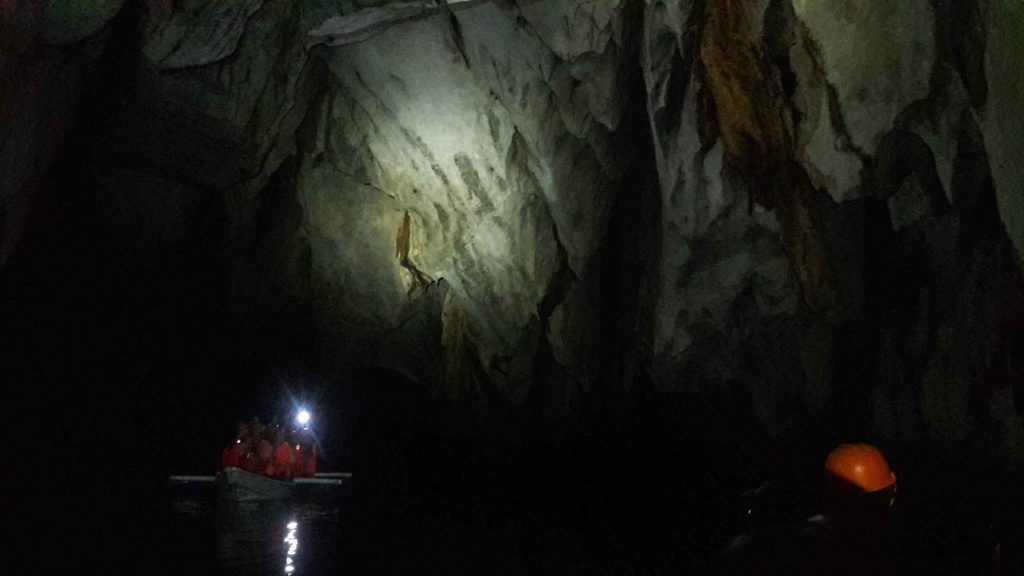 You should know that the Underground River is the ultimate tourist attraction in Palawan so it gets really crowded sometimes. It’s the only reason I have mixed feelings about it and hesitate to recommend it to you or to people who ask me about it. There’s no doubt that once you’re there, the visit is a one of a kind experience. Are 30 minutes of pure bliss worth the travel and waiting time? You should be able to answer this question if you know what you’re looking for in the Philippines!

The Immaculate Conception Cathedral is another interesting attraction you can visit in Puerto Princesa. Here’s where to find it[10]. There are $10 tricycle city tours that include a visit of the cathedral but you can also go there on your own or rent a tricycle downtown for a dollar. 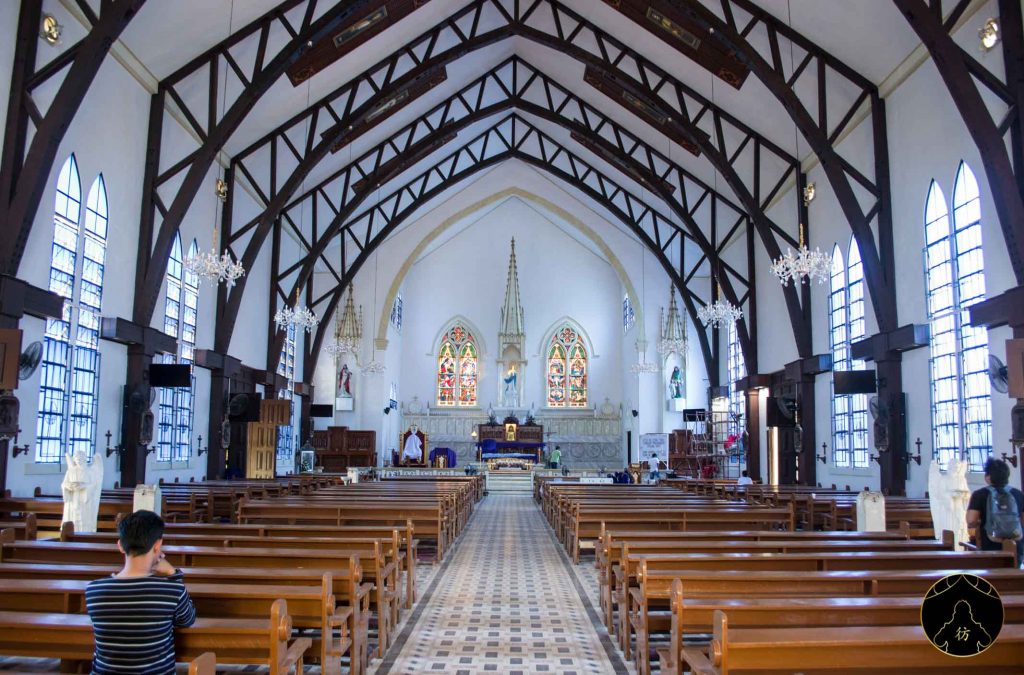 Puerto Princesa Philippines – Where to Eat? 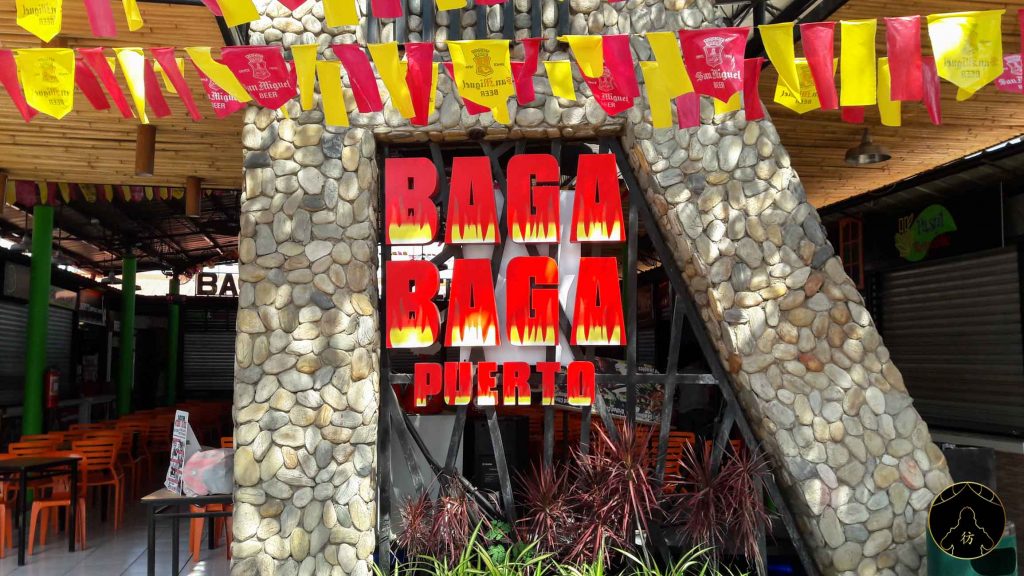 There are many restaurants downtown that serve a variety of Asian dishes, especially Vietnamese cuisine. I loved eating at the Baga Baga Food Court[11] which has many restaurants and great WIFI!

If you’re more into Western food or if you’d like to shop for groceries, there’s a very convenient shopping mall called Robinsons[12] where you can get what you need. It’s just outside the city so you might need a tricycle drive to go there. Grab one from downtown Puerto and it’ll cost you around a dollar. 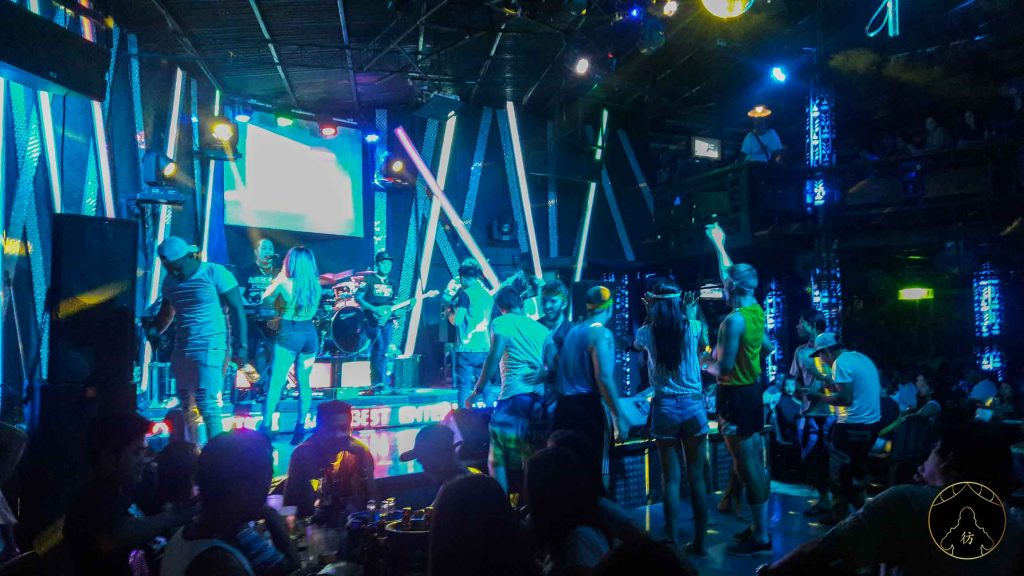 If you’re looking for a nice place to have a drink in Puerto Princesa, Tiki Bar is the liveliest and most popular place you can be. It’s not far from Baga Baga and you can go there to try the local beer (namely Red Horse) and play pool for around $4 an hour. Stay after 10PM and you can dance your heart out at Tiki Bar, or stay after 11 and listen to a local band that plays nice music! 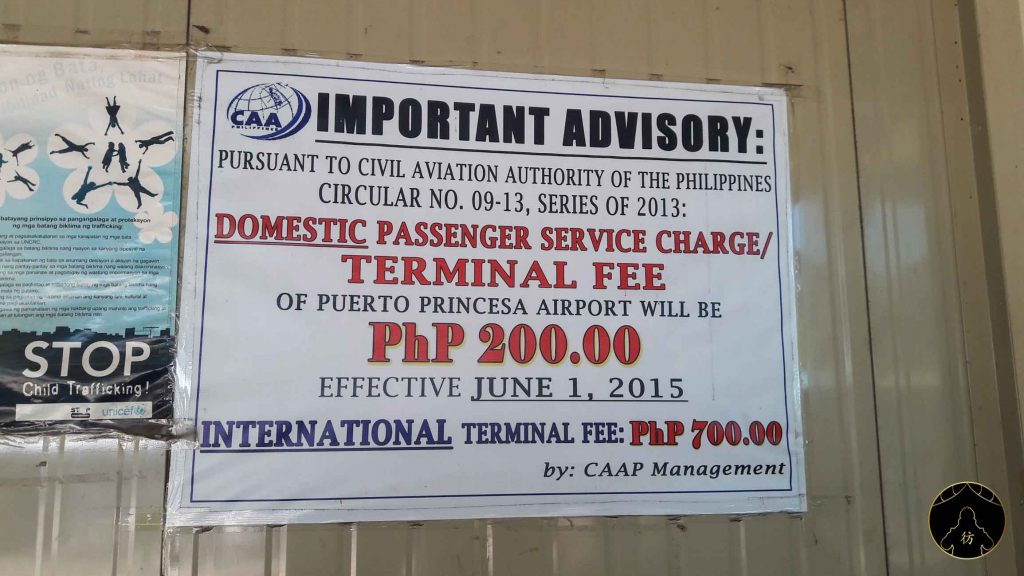 Last but not least, you might find this information useful: if you’re leaving Palawan from the Puerto Princesa Airport, you’ll have to pay an airport terminal fee of about $4 after check-in. I thought it was included in the plane ticket price but apparently not. If you happen to know more about this, let me know!

I think I told you everything you need to know about Puerto Princesa! If you still have any questions about something I haven’t covered, please let me know in the comments below.

Oslob Cebu Philippines – Why I didn’t swim with Whale Sharks!

El Nido Palawan – A Beautiful Piece of Paradise in the Philippines

A History of and Climbing Guide of Mt Fuji

Thailand welcome its 38.26 millionth tourist to the Kingdom

Tagaytay Philippines – The Best Things To Do + More Travel Tips

Batanes Philippines – All Our Travel Tips To Visit These Lovely Islands

Best Beaches in Philippines – 7 Dream Destinations You Should NOT Miss

Why You Should NEVER Take A Starfish Out Of The Water!