“Don’t touch,” said Hem, guide and human encyclopaedia, as I attempted to move past a thorny shrub. “It will sting.” The stinging nettle, a flowering plant that runs wild in these hills, looks innocuous enough but delivers a sharp sting upon touch. And itches for hours. I’d been stung as a kid and remembered the aftermath vividly enough to steer clear. My husband and I were on our way back to Tree Leaf Grand Oak Manor, our haunt for the next four days at Uttarakhand’s Binsar Wildlife Sanctuary. The crisp mountain air and the walk through the forest—a maze of rhododendrons and oaks—ensured that I was looking forward to my lunch of Kumaoni thali.

We had been in Uttarakhand for about a week, early April of 2018, but hadn’t had the opportunity to sample much local cuisine. We had, however, gorged on the famous baal mithai (a fudge-like sweet coated with sugar balls) and singodi (khoya, served in a betel leaf cone) in Almora, fresh from the famous Khem Singh sweet shop. We had also loaded up on buransh (rhododendron) juice, a refreshing experience. When we reached our homestay, a beautifully restored British-era mansion, the table was already laid. The pahadi grub that awaited us was a three-course meal, starting with—fried nettles! Not ignoring the irony, I took a bite of the versatile bichchu ghaas, also known to have medicinal properties, and sure enough, it was crunchy and delicious!

Served on old traditional silver thalis that belong to the Gangola family (who run the homestay), the meal consisted of lamb in a spicy gravy, horse gram lentils, lightly sautéed local greens, mixed grain roti, yogurt with mustard, and a chutney made with marijuana plant seeds. It was one of those sublime meals, during which quiet descends upon the feasters and conversation is minimal. The horse gram lentil or gahat is a staple, a wonder legume that has no cholesterol or fat, is rich in iron and known to fight kidney ailments and obesity. Sharp on the tongue and a tad spicy in the cool mountains, it posed the perfect balance to the bhaang (marijuana) chutney, greens and roti. We were hooked. 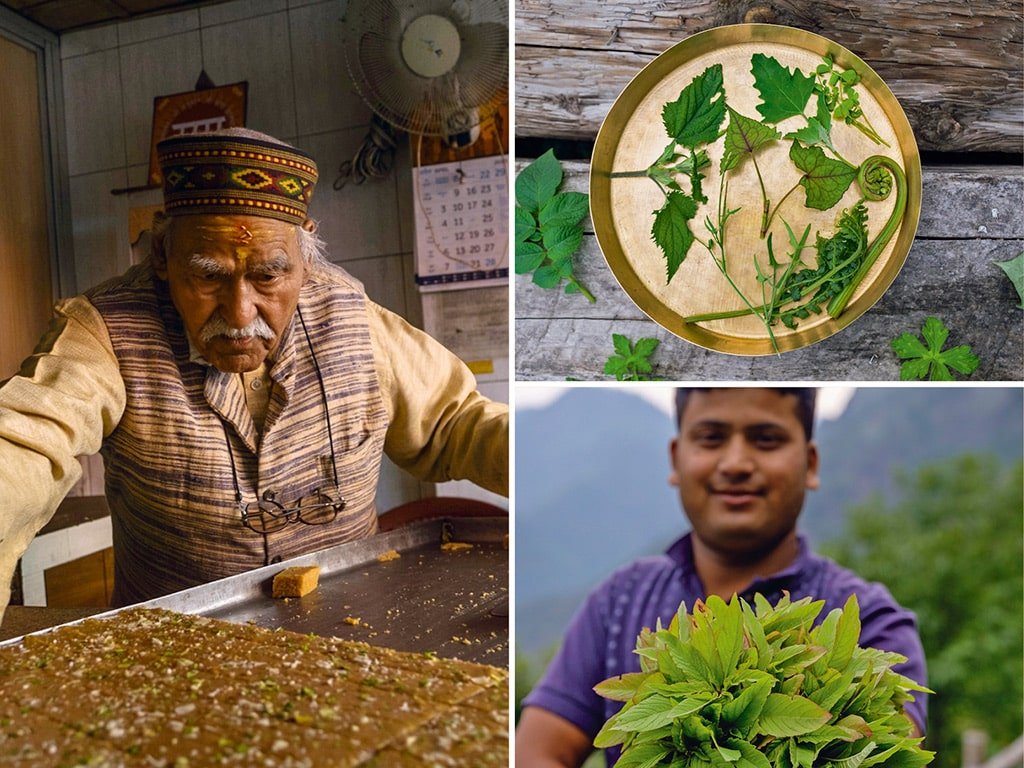 A couple of weeks, countless shared taxi rides and several villages later, we landed up about a kilometre from Munsiyari in Sarmoli, the village enroute to Khaliya Top and the Milam Glacier. Our host in Sarmoli—a far-from-the-madding-crowd village —rustled up two different versions of gahat (my new favourite). Much to my delight, both of them had oodles of hot, homemade ghee—life was great. Meals in many of the smaller villages across the Kumaon and the Garhwal Himalayas, we realised, comprise produce grown and consumed seasonally. For us, it was cabbage that was in season, served in many places with the gahat and almost always a side of the bhaang chutney, easily available even in roadside dhabas. True to every mountain cliché, everything tasted healthy and amazing—I was convinced I was growing fitter and stronger.

After a few treks, we were ready for some downtime in Sari village close to Deoria Tal. Rakesh, our caretaker at Café Buransh, was happy to oblige us with local Garhwali cuisine and countless cups of chai as we spent a few afternoons reading in the garden. After Grand Oak, we hadn’t eaten nettles again, so when Rakesh whipped up zingy nettle chutney and served it with steaming red rice, we were delighted. Alongside, we lapped up a gravy of roasted soy beans, which I remember for its smoky flavour. While white rice is easily available for tourists, the slightly fatter red variant is locally grown and has a higher nutritional value suited for the climate. We were happy to eat local, and once dunked in hot dal and ghee, you can barely even tell the difference.

It was also in Sari that Rakesh introduced us to chaulai, commonly known as amaranth. An excellent source of protein and one of the new superfoods to grab the world’s attention, this gluten-free grain is packed with vitamins and minerals. Called ramdana/rajgira in Hindi, it has been consumed in this part of our country for centuries. Part of the locals’ summer diet, the leaves are as beneficial as the now-eulogised grain, usually stir-fried with almost no oil, some onions and a hint of chilli. Rakesh claimed they had a cooling effect during warm days. The leaves tasted as delicious stir-fried—mixed with onion or mustard leaves—as they did when added to different lentils, pureed with potatoes or even tossed into spicy chutney.

Our four-day halt at Sari was peppered with many delights—long, panoramic walks around the village, the comfort of our small hillside guest house, and a trek upto Deoria Tal, with the grand Chaukhamba range in the backdrop. But none matched up to our fervour for the chaulai, of which, I fear, there might have been a real shortage after we left.

After over a month on the road—time spent village-hopping, devouring tangy kafal berries and noshing our way through different parts of the state—we found ourselves in Landour. The languid little town was our stop for some alternative food options in the form of English bakes and desserts, and some well-brewed coffee. This welcome break, in the form of scalding but flavourful soups, mango-peach cobbler and simple chicken salad or sandwiches, meant that we were saved from dietary monotony setting in. Sitting at the Landour Bakehouse, sampling their chocolate crepes, soft cinnamon rolls and orange marmalade cakes (on the menu, each is named after local grandmothers), I picked up a book for sale at the bakehouse.

Intrigued by his story of a young British army deserter who ends up building an empire in the Kumaon (The Raja of Harsil: The Legend of Federic Pahari Wilson by Robert Hutchison), we decided to head north to Harsil. On our way, we stopped at The Goat Village farmstay in Raithal. Run by the social enterprise Green People to stem out-of-state migration by creating employment opportunities, these are farmstays in partnership with the local community. We never did make it to Harsil as monsoon set in quick and strong, but the book kept me entertained. Luckily, the view from Raithil—that of the craggy Bandar Poonch range, almost close enough to touch—was captivating. What also kept us there was some of the best food we’d eaten on the trip. 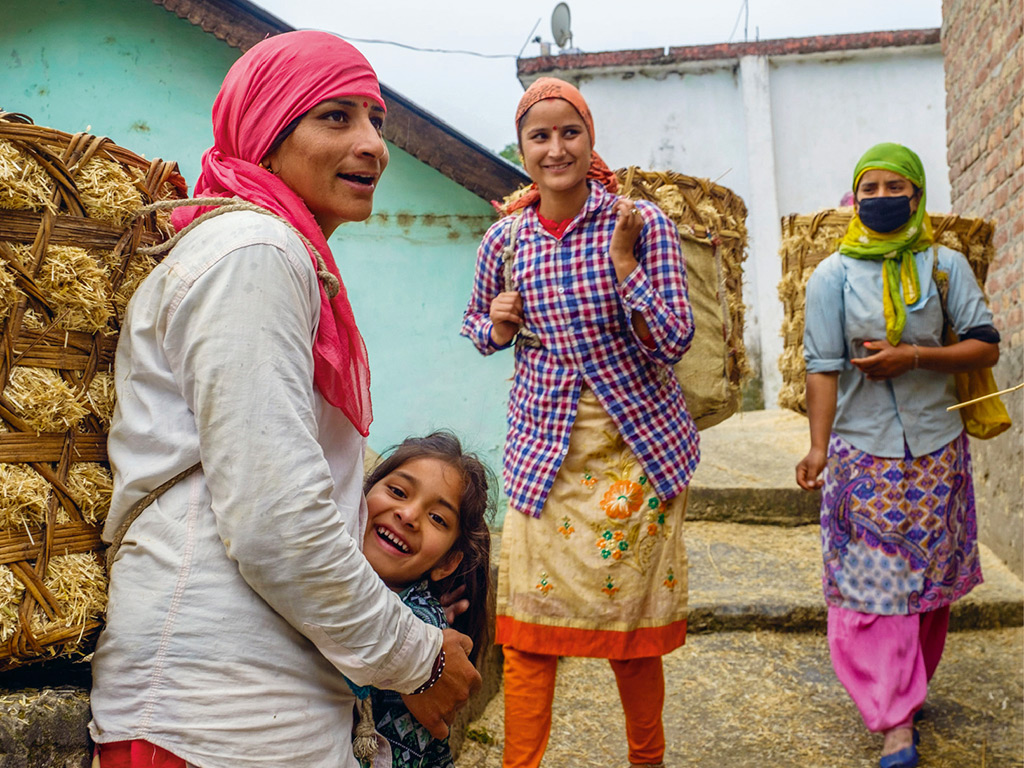 At Raithal, amaranth made an appearance again, this time in porridge, just as delicious as the leaves. Another local legend of a grain we sampled was the banyard millet, known as jhangoora in the hills. While I didn’t particularly take to this one, it is known for its richness in iron and protein. What I was intrigued by, were the different uses of ragi or mandua flour. , here mandua was also made into sandwiches! It was also mixed into other flours for its nutritional value, and cooked as halwa. Harveer, resident chef and storyteller from Goat Village, made sure we tried almost everything his region and garden had to offer, including Harsil rajma, unique to northern Uttarakhand; white soybean, the richest source of non-animal protein; and an assortment of greens. It was fascinating to watch Harveer walk around his garden, plucking a leaf from one plant and a fern from another, all transformed under his skilled hands. Every meal produced something different and we ate our weight in Garhwali cuisine—simple, and au naturel. It made us realise even more that we’ve been producing some absolute health-wonders in our own backyard for centuries.

Our culinary journey across Uttarakhand was an eye-opener. India is a gastronomic delight, but we don’t often get to sample recipes from the more remote corners of the country, especially from the smaller villages, where food habits flow to the rhythm of nature. The trip took care of that, as we embraced the local and seasonal ingredients that Uttarakhand’s cuisine has always celebrated.

Sarawak Destination Video | Why Limit Yourself

A Walk Back in India’s History