To Cambodia with Apps | TNS – The News on Sunday

A third-world capital city, Phnom Penh is without the cacophony of honking horns and with both the sexes comfortably going about their everyday business

I was not familiar with Cambodia in any way before I decided to visit it. I had been surfing the internet when I stumbled across a list of countries to which holders of the Pakistani passport could travel without any visa hassles. , Nepal, Trinidad and Tobago, Qatar, Seychelles and Vanuatu. I searched around to make sure I was not mistaken.

. I searched for the e-visa options. That option existed. It basically involved creating a username and a password, entering your passport details, uploading a picture and paying the visa fee with a credit card.

Women ride scooters and (wo)man their own roadside businesses.

The e-visa was emailed to me the same day. I felt quite honoured at this kind of treatment as if Pakistani passport held some magical properties. The same passport seems like a curse if you try to enter a first-world country. I thought this is what a Swiss or Canadian passport-holder must feel like while travelling: that they are welcome. An unusual feeling for the holders of the Pakistani passport.

During my stay in Copenhagen, I had become familiar with the world of Couchsurfing.com, a platform that allows people to host or be hosted all over the world. I had been a host in Copenhagen. I searched for hosts in Phnom Penh, . .

Another option was Airbnb, a platform for sharing your free rooms for some price, a kind of Uber/Careem for finding lodgings. Even on Airbnb, most of the superhosts had their places taken for December and January. Superhosts are those people who have positive feedback from their guests for providing “outstanding hospitality.” While Couchsurfing is free, Airbnb hosts charge you for their welcome.

The next option was Hostelworld. Here I was able to find shared accomodation with other backpackers. At this stage, I only needed a place to crash for the night. My flight was arriving at 9.30pm at Phnom Penh and I did not have the luxury of showing up at the reception desks of different hospitality businesses in a city which was totally unfamiliar. Therefore I made a booking after reading that Envoy Hostel in Phnom Penh had an aggregate rating of 9.3 out of 10. And I am glad I made that choice. They promptly confirmed the booking with an email and asked about the time of my arrival. I told them it would be between 10pm and midnight.

At arrival, my e-visa was treated as a normal sticker attached to a passport and I was stamped into the country. The airport had a free and open WiFi connection. I tried to use my Pakistani Uber account to see if Uber was available. I got a notification that Uber was not operating in the area. , another ride-hailing service.

The first thing that I noticed was the absence of any gender barriers. Women were riding scooters and (wo)manning their own roadside businesses. It all seemed so matriarchal, meditative and magical at that hour of the night.

I walked out of the airport and went to the official counter of Phnom Penh Taxi Drivers. Their prices are fixed. I was told it would be 15USD to the address of the hostel which I had saved as a screenshot on my mobile. I was not wise at that time and needed to crash in a room. Only the last segment of my itinerary, from Dubai to Phnom Penh via a brief stop at Yangon (former name Rangoon, the biggest city and the former capital of Myanmar), was nine hours.

The taxi ride from the airport to the city-centre was amazing but the driver did not speak English. I should have kept a Khmer version of the address in the phone too.

Phnom Penh at night is mesmerising and peaceful even though many travel forums online tell you about bag snatching and other things. The first thing that I noticed was the absence of any gender barriers. Women were riding scooters and (wo)manning their own roadside businesses. It all seemed so meditative and magical at that hour of the night. A third-world capital city without the cacophony of honking horns and both sexes comfortably doing their everyday things.

At 10 in the night, a woman selling traditional Khmer street food which I could not name reminded me of the line from One Hundred Years of Solitude: “The world was so recent that many things lacked names, and in order to indicate them it was necessary to point.” This is what travelling does. It transforms highly literate and vocal people into illiterate and mute people who can only point at things. 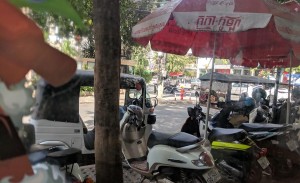 A local app PassApp is used for hailing taxis, tuk-tuks and rickshaws

Almost all the shopfronts have their names in Khmer. My Khmer was only oral and limited to one phrase ‘aw koon’ (thank you) and it remained like that throughout my trip.

The taxi driver dropped me right in front of the hostel and I pressed the doorbell of the locked building. Someone looking at me through the security camera pressed a button and the electric lock of the heavy gate clicked open. I walked into the foyer and met the friendliest receptionist named Sopheak.

Not only did he make the check-in process smooth but also told me he had a local SIM available if I wanted. I said yes. For two dollars, I had a local SIM and an internet package. I also asked him to install the most affordable ride-hailing app on my phone. He installed PassApp for hailing taxis, tuk-tuks and rickshaws.

With that, I was ready to explore the city on my own. In tourist hostels, you need to have your own locks for the lockers assigned to you. Even brand new locks were available at the reception of this hostel.

The temperature in Phnom Penh in December is very pleasant and remains within 23 to 30 degrees celsius range. The night was quiet and pleasant. The room had air-conditioning. There was no loadshedding in the capital, . I slept peacefully with the knowledge that I was going to explore Phnom Penh and Sihanoukville and Koh Rong in the coming days.

The next morning I found the city even more peaceful. I had the feeling that I was living in a quiet neighbourhood of Phnom Penh. I went out and looked around. There were tuk-tuks waiting outside the hostel for tourists. I asked one tuk-tuk driver how much he would charge me for a return trip to Choeung Ek Killing Fields. He said 15 USD. I turned on PassApp and checked the fair.  The app told me that it would be approximately the same after converting Cambodian Riels into US Dollars. I asked him if we could have breakfast somewhere. He said there was a restaurant in front of Choeung Ek Killing Fields. I asked him if it was possible to go to Choeung Ek Killing Fields and the Genocide Museum. He agreed to do everything for 25USD including waiting while I was doing the touristy things. That seemed like a fair deal.

On the way to Killing Fields, I saw a mixture of wealth and poverty and some very expensive cars. The contrast between the rich and the poor was too wide. There are beggars as well as skyscrapers and Porches and Mercedeses and Range Rovers. The Killing Fields is located on the outskirts of Phnom Penh and the ticket with an audio tour costs 6USD.

The site is very depressing because it is one of the many sites where mass murders took place. There is a stupa housing human skulls and bones. The audio tour tells the visitor that the skulls are colour-coded by forensic experts. The audio tour informs that Pol Pot and Khmer Rouge killed more than 1.3 million people at sites collectively called Killing Fields. There is a tree in Choeung Ek which was used by the Khmer Rouge soldiers to smash children’s head against it. People have adorned it with prayer beads and bracelets.

After spending some time in Choeung Ek Killing Fields, I felt I could not deal with the suffering. I decided to postpone every other touristy thing and cut my trip short and came out. I asked the driver to take me back.

On the way back, there was no word exchanged between me and the tuk-tuk driver. . . I was no way literate in the realpolitik of Southeast Asia. I needed to go to my hostel room and read more.

12 Most Beautiful Waterfalls In Kerala Worthy Of Your Bucket List