The sun was just rising when we arrived in the dusty town of Siem Reap. It was odd how a mud road from the airport, opened up to a spacious main boulevard, lined with street lamps, and grand hotels. Right at the end of the road, our van snaked right into a narrow alley and suddenly, we were in the center of Siem Reap.  Packed with scooters and tuk-tuks, the streets were hectic and dusty. But I smiled to myself, this was the way I liked it – SouthEast Asian style. Unpretentious and surreal.

I liked the smell of the lotus flowers. Its fragrance brings peace and tranquility. And it was pure serenity at the Angkor Wat. We were there early, and so avoided the tourist crowd. You could hear birds chirping, dragonflies buzzing over the pond and pilgrims chanting in the holy grounds.

The pond surrounding Angkor Wat is a heavenly match with the historical temple’s greyish walls. You could see a perfect reflection of the majestic temple on the still water surface. In the morning air, it felt like time stood still. I treasured the silence, and the feeling of being away from the crowd and at peace with the spiritual beings. 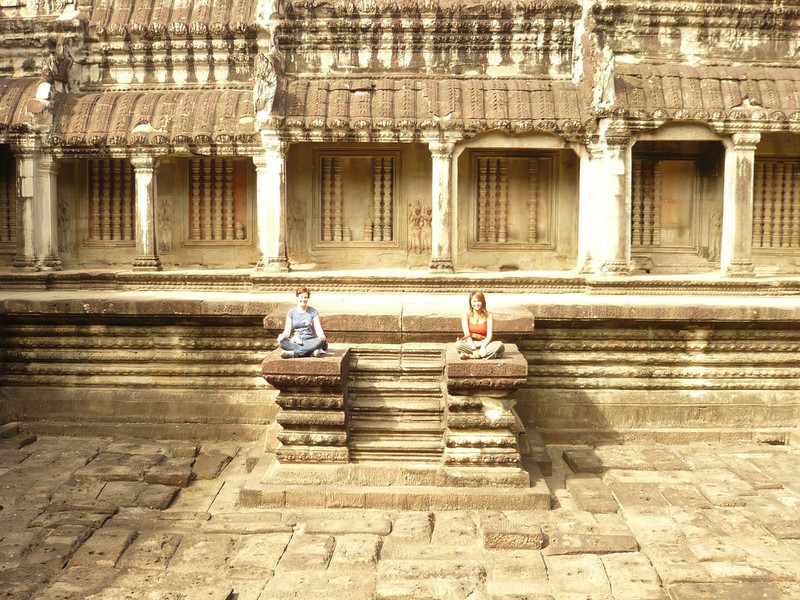 Through the intricate carvings on the wide grey murals and snakey columns, you could imagine how the Khmer Empire had flourished in those days. The carvings depict scenes from the Hindu Epic, Ramayana, showing the battle of Kuruksetra and a gruesome vision of hell. 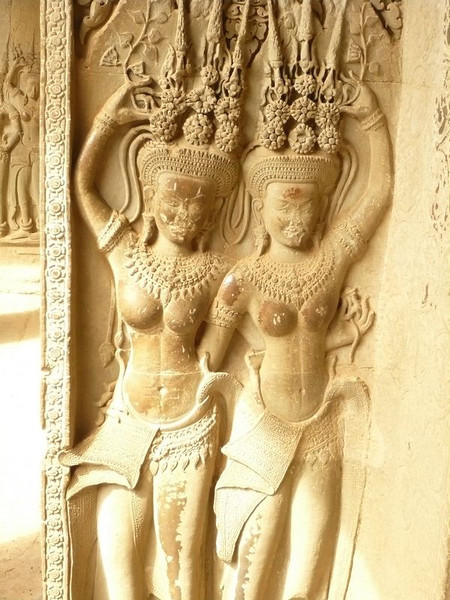 Unknown to many, Siem Reap is a sprawling holy ground, with numerous temples spread out around the main Angkor Wat temple. The Bayon stands in its glory rising atop tumbled rocks that used to be part of the temple. Renown for its 4-faced figures, it is almost a standard Kodak moment at the top of the Bayon, posing with many of the faces.

Clambering up and down steeply-carved steps of the temple, you easily find yourself in a dark shadowed pavilion, staring at a odd figure. According to the ‘guard’ of the temple, he explained that it was a representation of yin-yang, male-female balance, the fundamental on which the Bayon is built upon. 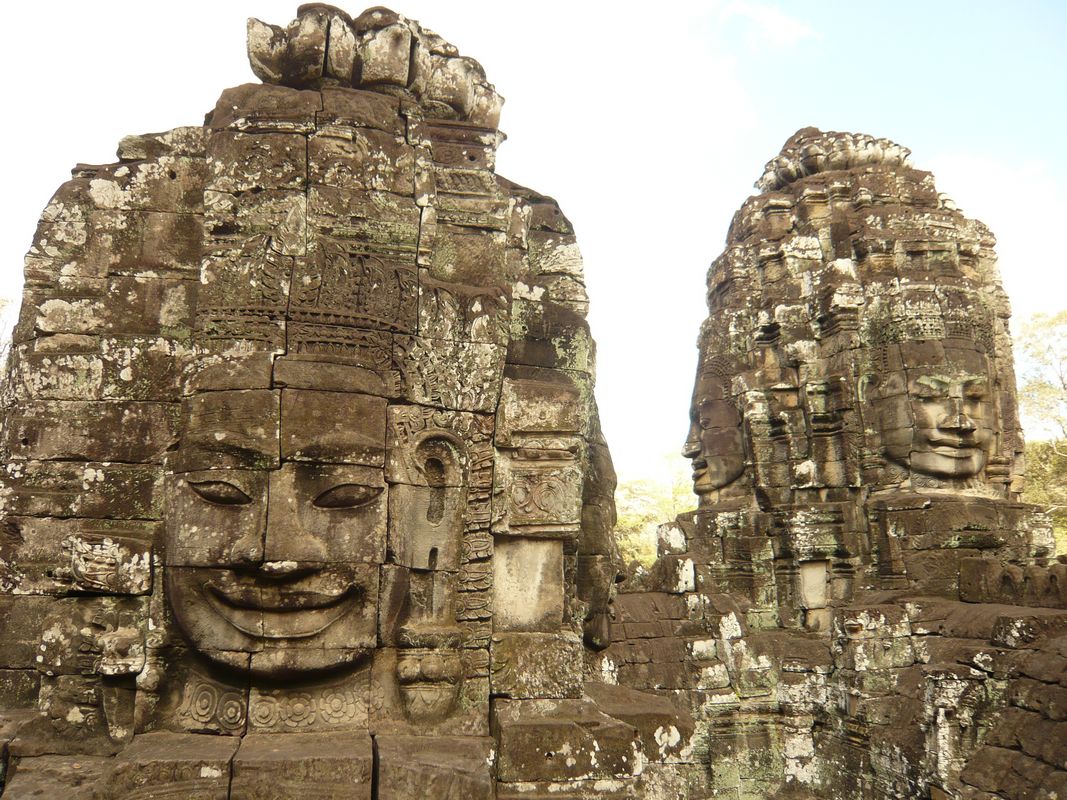 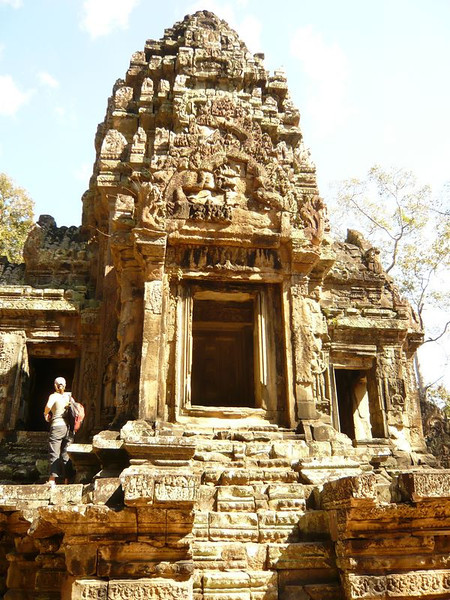 With long eerie roots creeping atop the greyed and algae-stained temple, this sight was unbelievably impressive. Exuding a natural mystique on its own, it felt abandoned yet haunting. Many know it from the Tomb Raider, where Angelina Jolie fights the evil in the grounds of Ta Phrom. Again, it was built on a huge area, with crumbling rocks uprooted by the thick and powerful forces of nature. Stunning, to say the least. 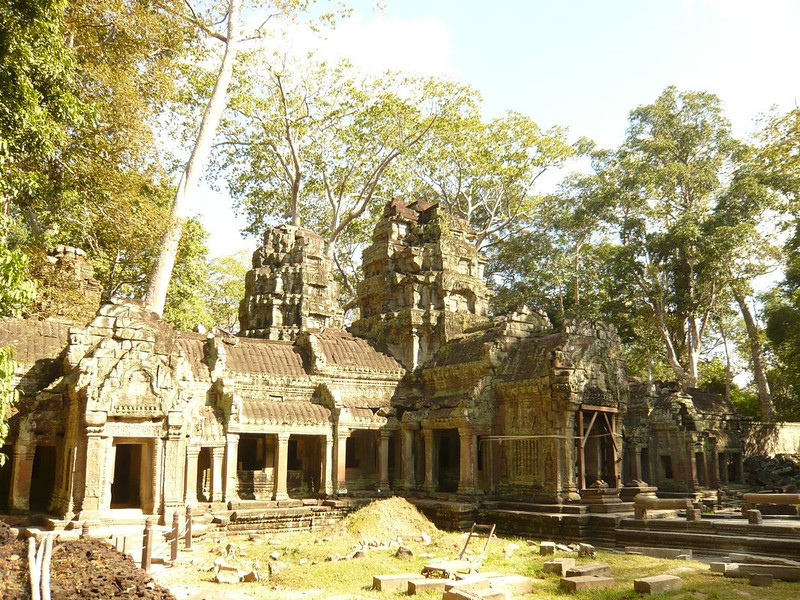 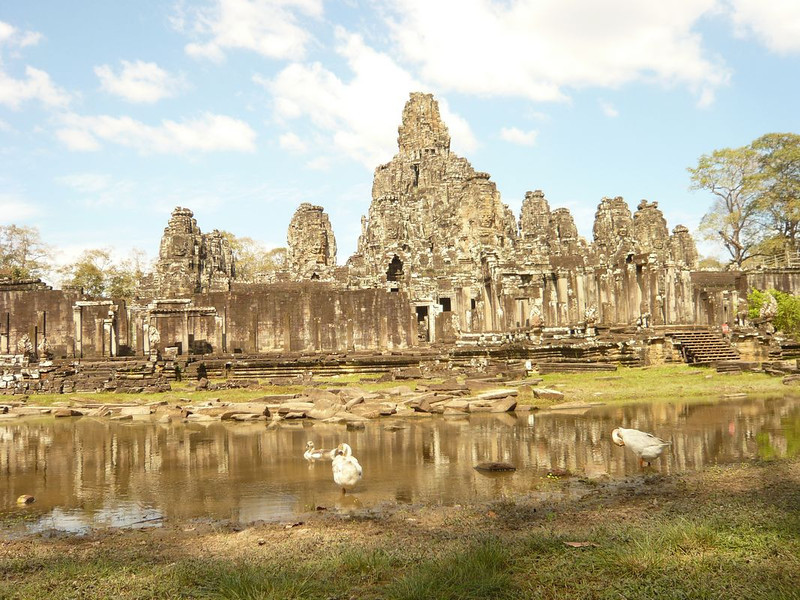 The area is impressive, and you might take a few days to explore all of it. Along the way, we saw several travellers on bicycles –  a great way to really take your time to delve into the temples. We opted for the tuk-tuk, since there were 4 of us and it was an economical and relaxing way of seeing the city. We even got to know our tuk-tuk driver well, Nong wasn’t chatty since he didn’t speak much English, but he brought us to the best places to eat and didn’t rush us when we wanted a longer siesta. With his ‘biking’ gloves, a pride in his shiny tuktuk, we knew he loved his job and couldn’t be happier. 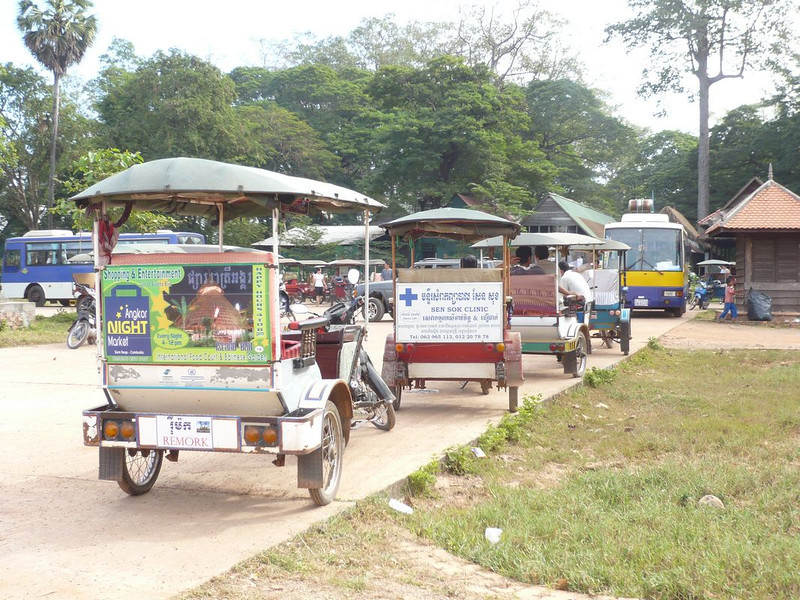 No offence to the temple-buffs, but it honestly quite easy to feel templed-out. So a word of advice would be to take your time and linger around the temples in the morning, and spread out the temple visits through a few days. It’ll be the perfect way to take in this ancient holy land and enjoy the beauty and serenity of the Cambodian city.

We stayed at Bamboo Forest Boutique Hotel and really enjoyed our stay. It’s got a great location in the center of Siem Reap, just 200 m from Wat Atwea temple. It’s around 10 km from Angkor Wat but you can easily catch a tuktuk there from the hotel. Rooms feature classic Khmer-style décor and are well equipped with TV and air conditioning.

Another place worth checking out is the Be Queen Boutique Hotel, just 400m from the Angkor National Museum. It’s very clean and affordable, with airconditioned rooms and a good restaurant. It’s closer to Angkor Wat and the pub street.

As a big fan of all food spicy, thick and saucy, I’m a huge fan of Khmer cuisine. – tender chicken simmered in rich coconut with spices and wrapped in coconut leave. Its mango salad resembles that of Thai salad, with a tad bit extra of coriander. The Khmer curry is also one helluva strong competitor.

For a good meal and live entertainment, Temple Balcony tempts you with authentic local food on their comfortable verandah, along with enthralling traditional Aspara dance performances. These talented artistes who fight hard to retain their dying traditions put up an impressive show, and makes the restaurant/bar definitely worth visiting.

Things to Do in Bangkok for First Timers