Jammu & Kashmir, Srinagar, and beyond

No visitor to Kashmir returns without taking a shikara ride on Dal Lake. We suggest going a step further—and ‘water trek,’ as Kashmiris prefer to call it.

From April to October, private operators in the region organise four-night expeditions by shikara that take you beyond Dal Lake, into the lakes of Manasbal, Wular and Nigeen, some in districts outside Srinagar. You’ll go with a guide and cook, camp every night beside a new lake, and experience the state as a local sees it best.

Nigeen Lake, named after the jewel inset of a ring, is an offshoot of Dal Lake and flanked by willow and poplar trees. Wular Lake in Bandipora district is one of Asia’s largest freshwater lakes, home to avian species like the Himalayan golden eagle, black-eared kite and Indian roller, with its waters teeming with carp and trout. Manasbal Lake in Ganderbal district is accessible via a shikara through the Jhelum river, and is a sight to behold in the summer when its waters are covered with lotus blooms. Do try lotus root, a Kashmiri delicacy (prices typically begin from Rs15,000 per person, including food).

Why Go Now: Sail on palm-fringed backwaters that aren’t in Alleppey

A boat ride along Poovar’s sun-loving backwaters is a chance to glimpse kingfishers and cormorants. Photo by: Ian Cook/agefotostock/Dinodia Photo Library

While in India’s southern tip, a cruise on the backwaters may be de rigueur, . In other words, , using Thiruvananthapuram as a base instead of Kochi.

It is in Poovar, 35 kilometres from Thiruvananthapuram, that the Neyyarriver joins the Arabian Sea, giving rise to a palm-fringed stretch of placid backwaters. An hour- or two-long boat ride cruises narrow mangrove canals, past dozens of avian species that thrive in this ecosystem. The muddiness of the water in the initial stretch is only recent and caused by the floods; boatmen say that the water is otherwise pristine through the year. Cormorants sun themselves on treetops, and pied kingfisher swoop in and out of the water in search of breakfast; even on cloudy days, the birds unfailingly show up along the banks.

In just about half an hour, the boats venture into open waters with a thin sandbar separating the canal from the sea. Locals call it Gold Sand Beach, and with the morning sun setting the sand aglow like molten gold, it fits.

Morning cruises also bring you face to face with the people who call Poovar home. Fishing boats, probably just back from an early-morning expedition, dock along the shore. Kids play on the beach, shouting and laughing, or dive off from flat rocks at the edge of the canal into the water. Tall crosses are interspersed with Hindu shrines along the waters, an image of the cultural harmony the region has prided itself on.

A few minutes beyond the last bend, the boat anchors at Pozhiyoor, the spot that marks the end of Kerala, .

Why Go Now: Dive alongside fish and wrecked German ships 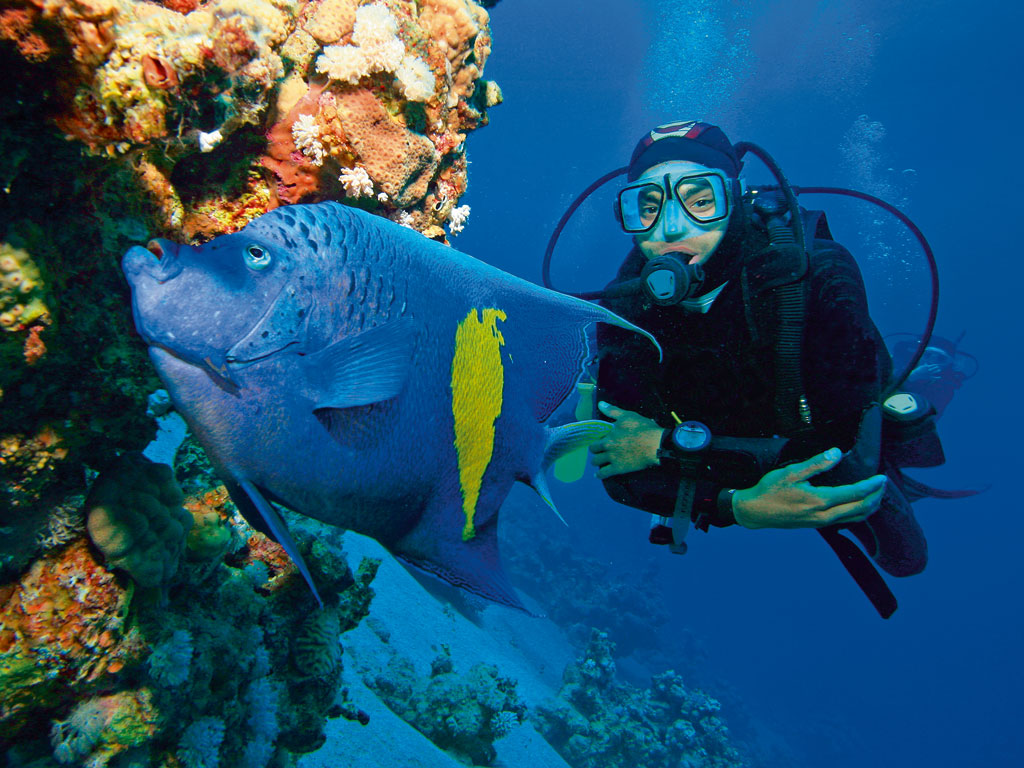 Just north of the Maldives, Lakshadweep is India’s answer to the gorgeous atolls of the island nation. Lakshadweep’s 36 islands—only 10 of which are inhabited—seem to have jumped out of a postcard. Its waters also nurture a wealth of marine life. It’s a tad complicated to get to India’s smallest Union Territory, but the journey is worth it for diving enthusiasts. Agatti’s airstrip is the archipelago’s only one. Ships from Kochi also take visitors to Agatti and the Kavaratti, Kalpeni, Minicoy, Kadmat and Bangaram islands. (One needs a travel permit from the Society for Promotion of Nature Tourism and Sports.)

In the waters off the islands, divers can spot manta rays, colourful corals and schools of fish, and maybe even a green or hawksbill turtle. The waters off southernmost Minicoy might be of special interest to divers who’d happily mull over history even while underwater—the island’s blue expanse is the site of wrecks of German steamships. It is a rare sight, how the coral and seaweed-wrapped propellers, boilers, and other machinery cradle some of Lakshadweep’s loveliest sea creatures.

While the highest point in Meghalaya, Shillong Peak, opens up to vistas of the capital city, less than 30 kilometres from Shillong, lies a lesser-known natural viewing platform—Laitlum. The name is a literal translation of the Khasi moniker, ‘End of Hill.’ A winding road from Shillong goes past the village of Smit to reach the edge of this East Khasi Hills tableland which opens up to magical views of the Meghalaya highlands. There are deep gorges, waterfalls during the rainy season, and if one is brave enough to peer down to the valley, snug villages by sparkling streams. A narrow trail with stone steps hugs the precipice, for those with time and stamina to trek down to the village of Rosang at the foothills. Smit is famous for the vibrant Nongkrem dance festival that takes place every year—usually in November—to honour the powerful goddess Ka Blei Synshar for a successful harvest and general prosperity of the people. Just ahead of this historic village, an expansive valley opens up. The road passes by meadows with golden-green grass, the spectrum of hues highlighting a seasonal transition, and juicy pastures for sheep and cattle.

From the edge of the gorges, the view is cosmic and grand, as if one were at the end of Earth. Clouds float within touching distance and astounding scenery abounds all around. If Laitlum is Earth’s end, surely heaven begins here.

Perhaps the biggest surprise around the village of Kalote Mokashi in Raigad is in the time it takes to get there: If you leave early, you’ll make it in less than 90 minutes from Colaba in South Mumbai. In no time, a snug verdant shawl drapes itself on the terrain, ghats loom in the distance. Once you reach Kalote—which will require you to cross a dirt road lined with single-storey homes, and dotted with roaming chickens and strays enjoying a siesta—you’ll be this close to wanting to give up on the city. Cell phone signal is spotty, the roads most certainly washed out in the rains, but there is the pristine Kalote Lake around which Lets camp out has set up campsites. Each weather-proof tent offers basic comforts like electricity and hot water; but that’s not where you’ll be spending most of your time. The views of the hill-flanked lake are the stuff of long-lasting memories. Visitors can kayak, swim in the lake and trek around the area, which also has a waterfall.

There’s no dearth of things to do if you aren’t the sort to jump into lakes and sweat it out amid the hills. For one, there’s fishing. Even if that’s too taxing, try a game of badminton, or rustle up a slow-cooked meal you always planned for but never tried. Or the best of them all—lounge outside your tent, and vow to never forget how hot pakoras taste with chai when you can see dusk creeping up on a lake. 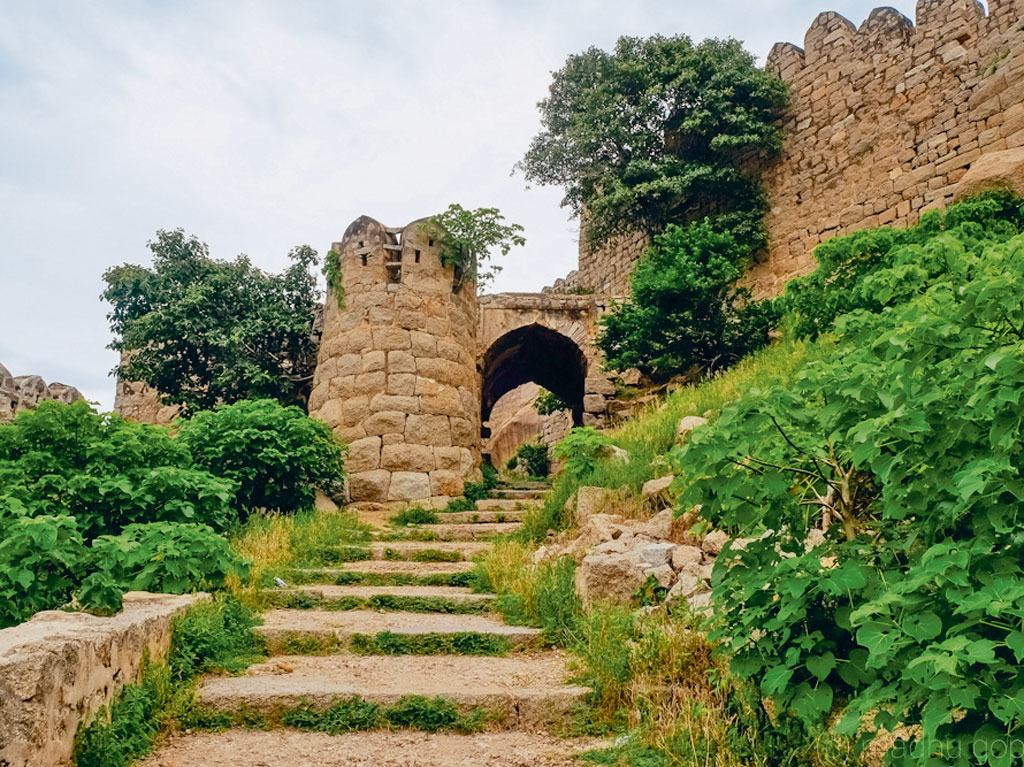 Haleem, biryani and Awadhi culture—Hyderabad throws up plenty of reasons to visit. We found one more, away from tourist hordes: rock climbing.

A hulking 750-foot-tall rock, almost four kilometres in circumference, looms 50 kilometres from the city. At the top of the rock are the ruins of Bhongir Fort, and at the base is the Rock Climbing School. While there are steps leading to the fort, the more fun way to get there is to scale the monster rock. The school offers courses for newbs as well as advanced climbers. The three-day beginner course is fairly intensive, and includes rope coiling and knotting, rappelling, belaying, and bouldering. The advance course is for people training in mountaineering. Poorna Malavath, the youngest girl to scale Mt. Everest, and the inspiration for the movie Poorna, trained here too (Rock Climbing School Bhongir; 96660 88821; courses start from Rs3,500).