Where To Go in 2020: For Rambling Forests and Wildlife-Spotting in India

Even as Bengaluru loses its acres to unchecked real estate development, several green oases in the technopolis house a stunning avian population. Though the city’s major oxygen suppliers Lalbagh and Cubbon Park host a number of species, venturing just outside the city offers prize sightings of glossy sunbirds or sprightly flycatchers. Here are some birding haunts worth ditching the big-city swank for:

About 30 kilometre/1 hour north of Bengaluru, Hesaraghatta was once envisioned as the city’s freshwater solution. What remains of the lake are swathes of grassland and a red-earth lake-bed flecked by thorny acacia trees. But it is still rewarding if you wish to meet sparrow-like oriental skylarks, rufous-backed shrikes and black drongos. Winter guests include blue-tailed bee-eaters, tawny eagles and short-eared owls.

Founded by the late philosopher Jiddu Krishnamurti, The Valley School is in a forested campus with wizened banyan and mango trees peppering a rolling landscape, only a 24 kilometre/1 hour drive off Bengaluru’s Kanakpura main road. No permission is needed to watch the resident sea blue verditer flycatchers, black-naped monarchs and the blue-faced malkoha.

Safe at 30 kilometre/1 hour away from the city’s industrial waste pits, Muthanallur is among the cleanest of Bengaluru’s lakes. A walk around the lake, hugged by wild shrubbery, is a meditative experience and offers a shot at spotting rare species such as the black baza and the peregrine falcon.

While the spots are all at close driving distance to the city, beginners can travel with groups such as Bngbirds and Bird Watchers’ Field Club.

Instead of dolphin- and skimmer-watching in Chambal

While Chambal boasts great chances of spotting Gangetic river dolphins, lesser-known places such as Narora, near Delhi, offer a more up-close experience with the creature. Hire a motor-powered country boat at Narora. The ride along the Ganga is fulfilling for birders, especially if they are on the hunt for Indian skimmers—a beautiful bird that skims the surface of water to feed vis-à-vis its long, low bill. Said beak goes from fiery orange at its start to bright yellow at the tip, a visual treat.

Resident river dolphins here also come with an abnormal and intriguing snout, almost like one took the thin, teethy mouth of a gharial and stapled it on the front of a porpoise. Even stranger is that these types of dolphins are actually blind, and use their incredible sense of sound to hunt freshwater fish.

While catching sight of these two unique denizens make a great day out in Narora, wildlife lovers should keep a keen eye out for endangered black-bellied terns, muggers, great thick-knees, river terns, pied kingfishers, and turtles basking on exposed rocks and sandbanks.

Instead of rhino-watching in Kaziranga National Park

Pobitora Wildlife Sanctuary in Assam’s Morigaon district boasts the highest density of rhinos in the world. This small, protected area brimming with wildlife offers a more accessible outdoor adventure than other popular Assamese sancturies such as Kaziranga, with a greater chance of spotting the endangered rhinoceros unicornis, the one-horned Indian rhino. The author himself has seen a staggering total of five one-horned rhinoceros from the main road right next to the park in 2015.

A safari through the wildlife park, which offers a closer gander at the creature, may also yield sightings of wild boars, leopard cats, and pangolins. Pobitora also abounds with lakes full of migratory birds, from lesser adjutant storks and open-bill storks to pintails, northern lapwings, and Eurasian coots. Stork-billed, common and white-throated kingfishers can be spotted near water bodies. Though, perhaps, the luckiest birder will spot falcated ducks or baikal teals bathing in the park’s many beels (lakes).

Pobitora Wildlife Sanctuary is a convenient 50 km/2 hr drive northeast of Guwahati. Although the sanctuary offers a few accommodation options near the grasslands, be sure to book the safaris and stay well in advance as they fill up fast.

Instead of the Sunderbans

Follow the coastline south from the Sundarbans and you’ll find yourself at another sprawling, albeit little-known, mangrove forest by the Bay of Bengal. Spread across 1,100 hectares, . A maze of creeks connects the Vellar and Coleroon estuaries, and in this watery labyrinth lie 51 islets covered in mangrove forest.

Glide along this biodiverse haven in a motorboat or rowboat, exploring vast expanses of water and slender channels less than five feet across. All along the shore, aerial roots poke solemnly out of the muddy banks, like needles with watchful eyes. The landscape is primeval, with the trees forming a low, dense canopy overhead, the vegetation closing in on both sides, and sunlight fighting to filter through the trees. One has to bend low to avoid the branches and peer deep into the foliage to spot signs of life.

Both aquatic and avian life thrives in this unique ecosystem. Cormorants, egrets, and brilliant blue kingfishers fly overhead. On the muddy banks, crabs scuttle between the tangle of roots. Mullets and shrimp dart around in the water. You are entirely alone in this watery wilderness, with only the diverse residents of the reserve forest for company. 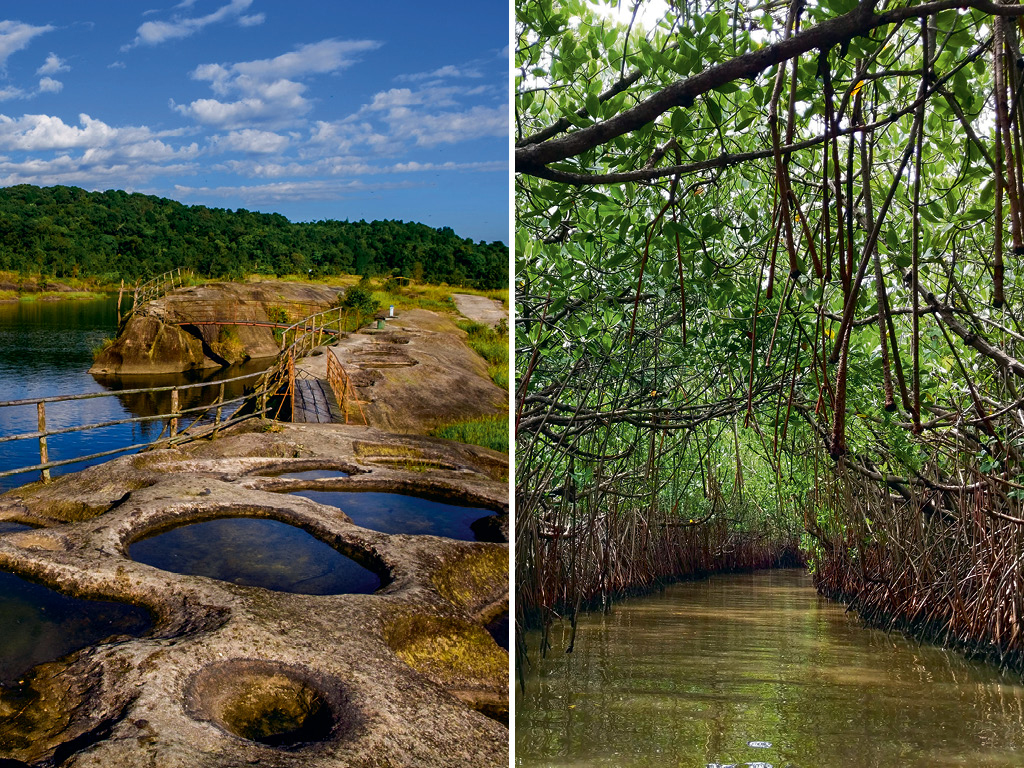 Two hours from Sohra, or Cherrapunji, that hero of geography textbooks, lies Mawlyngbna, a scenic, three-village cluster that’s stealing Cherrapunji’s thunder, bit by bit. A part of the Mawsynram region, crowned the wettest place on Earth by Guinness in 2015, Mawlyngbna is more of a plateau, while Cherrapunji is mostly dense forests and deep valleys. Topography-wise, Mawlyngbna’s natural potholes (picture micro-mini pools) are decidedly photogenic. In and around the beautiful Umkhakoi reservoir, you can go kayaking and zip lining, or venture a little further for canyoning, or to jump off cliff faces. Then rappel down a 100-foot-deep gorge, sliding in between two giant rocks—an attraction aptly called Split Rock.

Once underwater, Mawlyngbna also hides fossils within its folds, some over 450 million years old. Trust a young Khasi guide to point you to star fish imprints along the beautiful, two-hour-long Lew Luri Lura plateau trek that ends with a visit to a pitcher plant garden. But the real highlight in here is an “animal market,” a flatland inundated with what look like animal footprints. Legend goes, the market is from a time when animals talked. Trading and frolicking here, this was their adda of sorts.

From Guwahati airport, Mawlyngbna is a 172 km/5 hr taxi ride. Stay options at Mawlyngbna include the local council-run Traveller’s Nest, which also offers guides, compulsory for all activities. 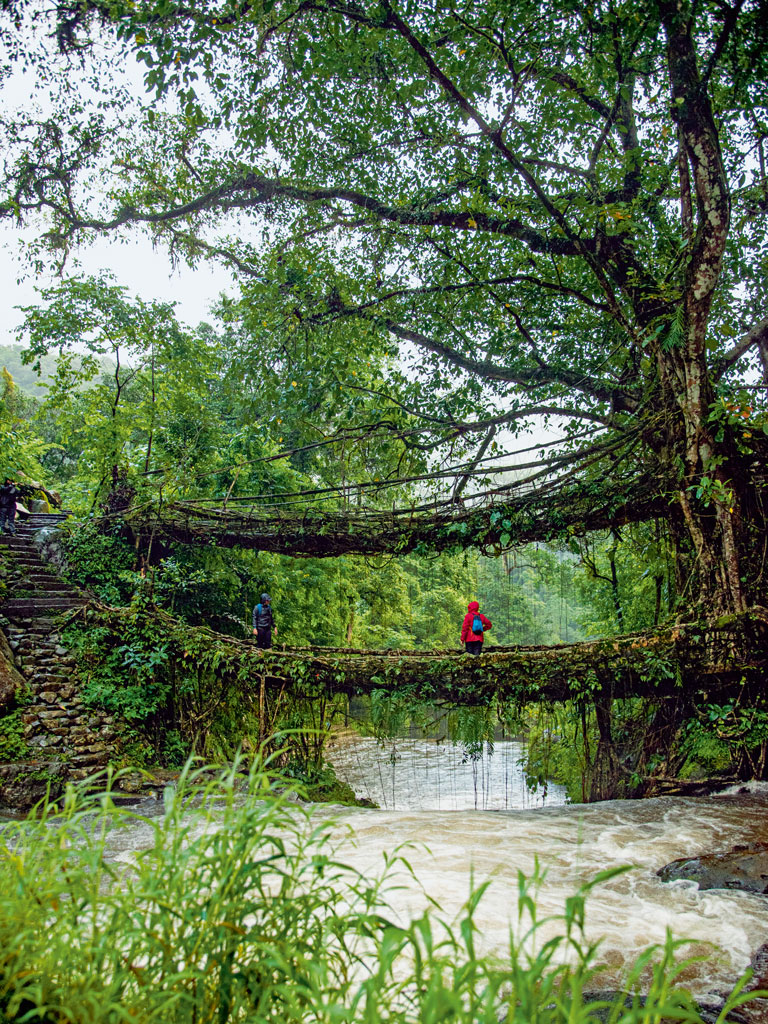 Descend into the forests of the east Khasi hills to reach Nongriat. Photo By: Sambit Dattachaudhari

An hour’s drive from the ever-popular Cherrapunji and a 3,500-step descent into the forests of the east Khasi hills lies Nongriat, home to the largest double-decker living root-bridge in the world. Woven by the Khasi community through an intertwining of aerial roots of rubber fig trees from either side of a stream, these ‘living’ bridges have taken over a century to get to the state they are in now, and they are ever growing. Photo ops are aplenty in the Tolkienesque landscape, although you’d do good to set the camera aside. With the pictoral Rainbow Falls lying slightly ahead of the root bridge, the trek into the forest is doubly rewarding. You will pass through tiny hamlets where locals offer fresh local lemonade and homemade ice cream to keep spirits up, scrambling now and then over some spectacular hanging bridges above turbulent tributaries of the Umiam river. Filled with water mist and the song of cicadas, Nongriat is best experienced in peak monsoon.

Nongriat is best accessed via Shillong, connected by train and flight to major Indian cities. From Shillong’s Police Bazar, take a cab to Tyrna (65 km/2.5 hr), the closest motorable point to Nongriat. Local guides available at Tyrna will take you on a 3,500-step pathway downhill, all the way to Nongriat and back.

Karnataka’s Honey Valley offers the best of nature in the form of hikes, nature-trails, waterfalls and streams which are perfect for herping. Photo By: Dhritiman Mukherjee

Given just how many homestays Kodagu (or Coorg) has, it could be India’s homestay capital. And yet, a few properties stand out, offering more than coffee plantation tours. Honey Valley is one such. In the lap of the Shola forest, at an elevation of 4,250 feet, it serves as the base camp for Coorg’s highest peak, Tadiandamol. Hiking, nature trails and waterfall-hopping apart, the streams here are great for herping. Armed with binoculars and torches, you can take a guided night tour to go reptile-spotting in and around the property. What (all) could you possibly see? Night frogs, dancing frogs, venomous Malabar pit vipers, coral snakes and cat snakes are all known to creep around here.

Kodagu is within driving distance of Bengaluru and Mysore. The stretch from Kodagu’s Virajpet district is mountainous and has steep inclines. The property can arrange for a 4×4 transportation from Virajpet at an additional cost. Avoid going in April since rooms tend to be booked out (honeyvalleyindia.in; doubles from Rs1,540).

Pollachi, a place that some dub Tamil Nadu’s open secret, is a picture book of stunning landscapes—forests, rivers, mountains and green fields. A rich culture and heritage further supplements it. Once known as “pozhil vaichi” (the land of natural wealth and prosperity) it was a historic trade hub in the ancient province of Kongu Nadu. 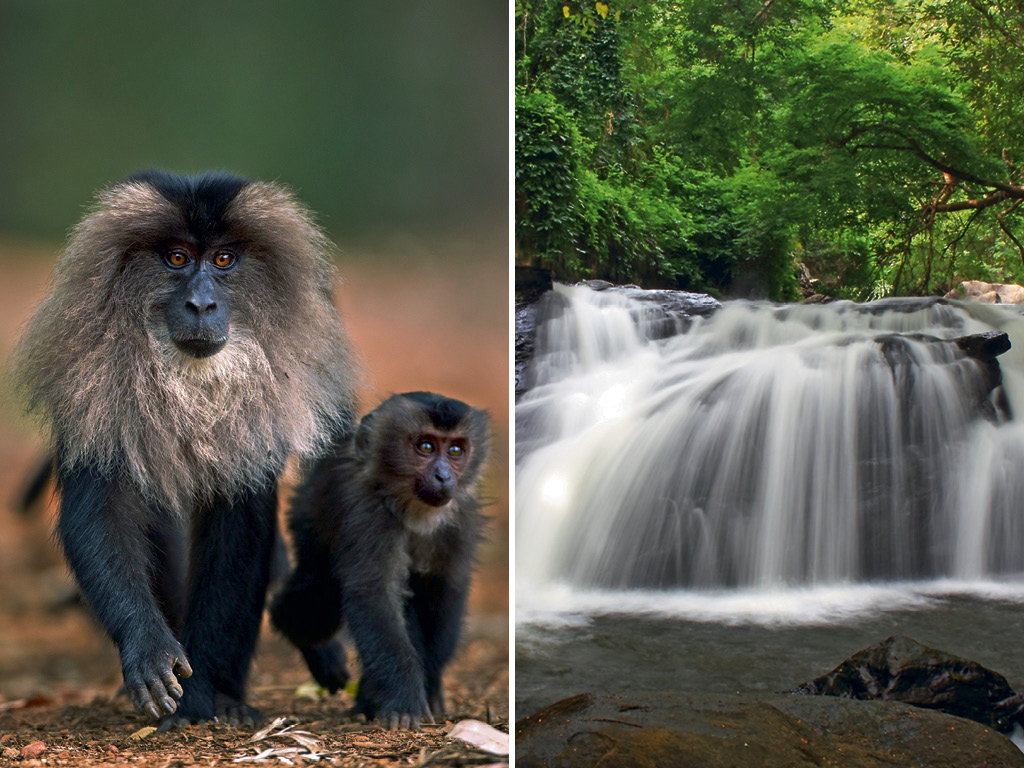 While the main town is in a constant flurry of activity, the hinterland illustrates a leisurely life. Pollachi’s biggest draw is its wilderness. There’s the Anamalai (Elephant Mountain) which is a biodiversity hotspot in the Western Ghats and a birding paradise. The Anamalai Tiger Reserve, spread over 958 square kilometres, is home to leopards, elephants, tigers, civet cats among other species. Hikers can embark through an ecological tract in Parambikulam, while the scrub jungles in Chinnar or the rainforests of Valparai and Topslip are good for slower adventures.

Arts and crafts, native to the region, are still practised in Pollachi, right from the thevar aatam where dhoti-clad men dance to the beat of the urumi drum or the kummi paatu, a dance that is accompanied by clapping of hands. Around 12 kilometres from Pollachi, in the village of Zamin Puravipalayam you will see sixth-generation potters honing their craft as their ancestors did.

Take a train or flight to Coimbatore and drive down to Pollachi, 40 km/1.5 hr away or take a bus. Overnight buses from Chennai or Bengaluru ply directly to Pollachi.

Chill out during the current cool season in Thailand